"The rules of the game are continually changing. It's no wonder that participants are now particularly receptive to the siren song: 'Discard the old, leave your historic core business behind and set out for the promised land'. Sometimes this advice leads to the right course, yet usually it does not solve the fundamental problem and can even aggravate the underlying cause of inadequate profitable growth. The key to unlocking hidden sources of growth and profits is not to abandon the core business, but to focus on it with renewed vigor and a new level of creativity."

To survive, a company must grow revenue from the core of their business. This article describes how open source can be used to help support revenue growth. We suggest seven strategies and provide examples of successful implementations for each.

Ways Companies Can Use Open Source to Grow Revenue

2. Sell more of a product that depends on open source. A common strategy is to use open source as a means of increasing the value of a primary, closed product. This approach is often leveraged by hardware manufacturers that have an embedded software component. Since the hardware, not the software, is their core business, opening up the development of the embedded software can promote the use of the hardware and provide a competitive advantage over other hardware vendors.

This approach to growth allows the company to focus on the differentiations for which customers are willing to pay and monetize the value of the brand that results from leading the development of the platform.

The Sun Microsystem's (now Oracle) Java platform is an example of such an approach to growth. The Java brand enjoys high recognition and is associated with a broad range of products and services, from desktop applications, to web services, to cell phone games. Sun's open source platform development strategy led to the effective creation of a "new product" for the company in the form of a brand, and they captured value through the lucrative licensing of the brand.

4. Sell more products by adapting language, interface, and features to different geographies and linguistic environments. This approach to growth entails reaching new geographies with existing products/services whose language, interface, and features have been adapted to be suitable to different geographies and linguistic environments. To implement this approach the company first modularizes all the regionally-specific components into a generic framework called a locale. Locales can be developed by participants in underserved markets who would benefit from access to products/services that weren't initially written for them. Mozilla's Firefox web browser is one of the most successful examples of such a growth approach. It has locales available for over 70 different languages and regional needs. It is likely that this localization strategy played a role in its rapid adoption, grabbing a sizable share of new markets where localized versions of Microsoft's Internet Explorer were not available. Figure 1, from Mozilla's Q1 2010 Analyst Report on the State of the Internet, shows the international usage statistics for Mozilla Firefox, highlighting the success of its localization efforts. 5. Sell new products and services in one place of the supply chain while concurrently introducing open source software in another place of the supply chain. A supply chain is a set of companies that work to progressively refine a product/service from basic principles, such as raw materials or consulting, until it is ready for consumption by an end user. Each company in the chain adds some value to the product or service and, in turn, extracts some value from the supply chain. This value extraction is not uniform as different companies at different places in the supply chain extract different amounts of value. In a vendor dominated supply chain, there is one company that extracts the lion's share of the value. Yet, this position is precarious. If it extracts too much value, there may not be enough resources to support the rest of the supply chain which could collapse. Such a collapse can happen even when there is high demand, especially if a product/service is disrupted. The key to company survival and growth is to gradually move towards the most profitable place in the supply chain, the place where the most value can be extracted.

One approach to shifting the value extraction point in the supply chain is to introduce an open source product/service that is positioned to compete with products offered at that level of the supply chain. This introduction is effectively signaling to the market that, since an open source product is replacing a paid product, the value-added is elsewhere in the supplier chain. This may lead to a devaluation of the other products at that position. The core business must, at the same time, focus on research and innovation to introduce new products/services that refocus and capture customer attention. This diversification strategy leverages the loss leader open source strategy, while positioning the loss leader elsewhere in the supply, outside of the core business, insulating it from devaluation effects.

This strategy is being experimented with in the Netbook supply chain. Several Netbook manufacturers have moved to release open source embedded operating systems for their devices that offer basic functionality such as web browsing and media playback. This strategy is testing the ability to weaken Microsoft's dominant position in the supply chain while funneling the value to device manufacturers who previously could only extract a small percentage of the total value generated by the supply chain.

Greg Wallace describes a similar effect in the customer relationship management (CRM) system supply chain based on the strategic choices of open source company SugarCRM. By moving the focus away from hardware and software and towards value added services in the CRM supply chain, SugarCRM positioned itself as the leader in customization services, its core business, extracting the lion's share of revenue from the supply chain. Figure 2 describes the evolution in the CRM supply chain in terms of value. 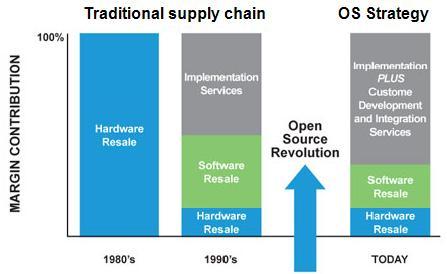 6. Open source a legacy product that is no longer generating sales. Software evolves quickly. New versions are released all the time, and new products replace old ones. Companies that have been around for a while will have a library of older titles that they developed and sold in the past which have since become obsolete, or are otherwise out of date. These older products are perfect candidates for open sourcing. The best way to open source them is to leverage a strong distribution channel, such as an online service, and to sell the complete product, documentation, and code as a single package for a significantly reduced price. The low price will lure customers who are interested in the product for personal research, interest, and nostalgia. By combining everything in a single place, from an authoritative source, even if the now-open-sourced product becomes available elsewhere at no cost, customers are likely to pay the small amount of money to purchase through the authoritative source.

The best current example of this strategy is Id Software which has a policy of releasing its games as open source under the GPL open source license five years after their initial release. This strategy has led to continuous sales of their legacy, open-sourced titles through their website, Microsoft's Xbox Live content distribution service and Valve's Steam distribution service, with some games still selling well over a decade after their initial release. It has also led to a large community following for Id Software games, with numerous ports, expansions, and other value-added components being developed for free by the community, adding value to the games themselves. This strategy also draws attention to the latest games that Id Software releases, increasing their sales.

7. Open source a transactional product. With the evolution of the Internet into a near-real-time, transactional network, products with distributed components that rely on network services have become common place. The businesses that develop these products maintain a network infrastructure or complex database structure and generate revenue from the product transactions that use these services. By releasing a transactional product as open source, a company can increase revenue generated by the user transactions by increasing adoption of the product. This front end provides access to the network services, and may even provide access to basic services at no cost to develop a user base. The value of the service is based on the strength of the network or data mining possibilities with the database, and, as such, the company is protected from imitation by competitors who might adopt the open-sourced front end.

There are several examples of this strategy in industry. Linden Labs, the makers of the popular virtual world Second Life, have released their Viewer and Snowglobe development environment as open source. This strategy has attracted attention from developers and new users alike. Linden Labs generates most of its revenue from services such as item sales and land transactions within the virtual world, so releasing programs used to access its services leads to an increase in their revenue potential. The revenue increase following the open source move has been substantial, with an increase of user-to-user transactions of over 65% year over year.

Growing revenue is challenging and an open source strategy can help companies attain their growth goals in novel ways. This article reviewed some of the strategies that have been successfully implemented by industry participants. They can serve as a starting point for companies to plan out a strategy that will successfully fuel their revenue growth while supporting their core business.

Mekki MacAulay is the Principal of OSStrategy.org, a consulting firm that helps companies improve their competitive advantage and strategic positioning in a world embracing open source. Mekki is also the president and founder of MekTek Solutions, an IT services company based in Ottawa, ON. Mekki holds undergraduate degrees from Carleton University in Computer Systems Engineering, and Psychology, and a Master's degree in Technology Innovation Management. His research interests focus on open source adoption; open source ecosystem value creation, extraction, and keystone company positioning; and quantifying the value of passive participation in open source projects.

Technology entrepreneurs must create value for customers in order to generate revenue. This article examines the dimensions of customer value creation and provides a framework to help entrepreneurs, managers, and leaders of open source projects create value, with an emphasis on businesses that generate revenue from open source assets. The proposed framework focuses on a firm's pre-emptive...

Technology companies have historically viewed partnerships through myopic, one-way lenses, asking only: "What can this partner do for me?" This type of thinking is even more pervasive with channel sales partnerships, where technology vendors limit the exploration of value to short term revenue contribution.

Vendors must broaden their scope and range of site when embarking on a...

Simulation of Supply-Chain Networks: A Source of Innovation and Competitive Advantage for Small and Medium-Sized Enterprises

On a daily basis, enterprises of all sizes cope with the turbulence and volatility of market demands, cost variability, and severe pressure from globally distributed competitors. Managing uncertainty about future demand requirements and volumes in supply-chain networks has become a priority. One of the ways to deal with uncertainty is the utilization of simulation techniques and tools, which...