In all affairs it's a healthy thing now and then to hang a question mark on the things you have long taken for granted.

Mergers and acquisitions (M&A) have been popular means for many companies to address the increasing pace and level of competition that they face. Large companies have pursued acquisitions to more quickly access technology, markets, and customers, and this approach has always been a viable exit strategy for startups. However, not all deals deliver the anticipated benefits, in large part due to poor integration of the acquired assets into the acquiring company. Integration can greatly impact the success of the acquisition and, indeed, the combined company’s overall market success.

In this article, I explore the implementation of several integration models that have been put into place by a large company and extract principles that may assist negotiating parties with maximizing success. This perspective may also be of interest to smaller companies as they explore exit options while trying to ensure continued market success after acquisition. I assert that business success with acquisitions is dependent on an appropriate integration model, but that asset integration is not formulaic. Any integration effort must consider the specific market context and personnel involved.

When large companies wish to bring new technology to market, increase their portfolio capability to address broader customer opportunities, or access new customers or market segments, their need to move quickly drives them to consider acquiring the assets of other companies. The target of acquisition, typically a startup, may have outstanding technology and a wish to exit stand-alone operation in favour of being acquired. Their motivation may be to leverage a larger company’s capabilities, such as cash for growth, access to channels, and brand association. The combination of these complementary motivations may seem to provide a strong force in the market, however, a strong commercial outcome depends on successful integration to realize the consolidated potential of any deal.  Many acquisitions that looked promising during the business case phase do not deliver to expectation, in part due to the implementation challenges.

Based on a several first-hand acquisition experiences, I have observed that the majority of the discussion preceding the close of a deal is often focused on the value of the technology being acquired, the fit to a customer’s solution, sales projections, market valuation, and potential roles for the senior leaders in the acquiring company. The most successful transactions that I have been involved with also had a clear strategy for the assimilation of the new company into the acquired company, one that fueled growth of the strongest assets.

Over an eight year period, Nortel made more than 20 acquisitions of companies to improve its market/competitive position and accelerate technology availability. This article will examine six of these transactions (Table 1), selected based on the author’s personal involvement. These selected transactions illustrate some of the characteristics of the different integration models being used and will be examined based on their impact on performance. 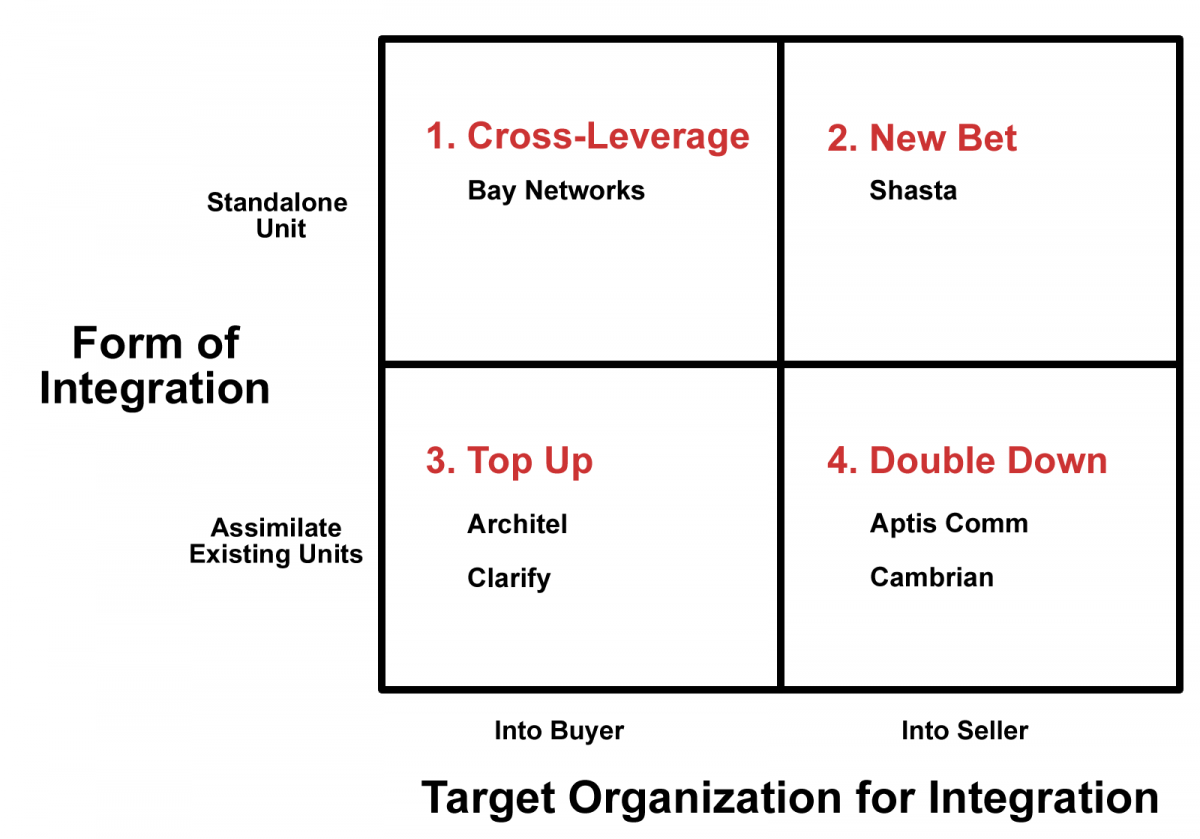 The motivation for using one model over another appears to consider the following:

Each of these four models had some strengths and weaknesses, as will be discussed in the following section.

The most successful transactions, as measured by market or revenue growth, were the ones that maintained a strong business focus after the deal closed, rather than a strong technology focus. By reviewing these six examples, the key attributes that contributed to success or failure can be distilled.

Aptis grew to become the market share leader in its category, despite competition from large, dominant players, such as Cisco and Alcatel.  Aptis had developed high-performance technology, but were struggling to penetrate the market. The following factors impacted their success:

With limited distractions and a clear focus, this became one of Nortel’s most successful transactions in that it exceeded its acquisition business case.

Cambrian grew to provide a successful platform and portfolio for Nortel, and it held a market leadership position for several years. The company had developed and delivered a technology capability in advance of most competitors and were struggling with scaling to demand. Following its acquisition by Nortel, Cambrian was provided with:

Cambrian was also a successful transaction. As with the Aptis acquisition, the decision made was to add capability and fuel to the unit that was focused and was gaining success. By doing this, Nortel avoided having to train a new leadership team and address the natural concerns that acquired companies have about being “taken over”. The key was to rapidly fuel a winning business and provide it with a compatible joint leadership team.

The “new bet” on Shasta was less successful. Although they had excellent technology and market position for their target service-edge market, the startup leadership team did not know how to leverage Nortel effectively and had little respect for the Nortel team, seeing the larger company as a drag on their nimbleness and momentum. Table 2 summarizes the factors that impacted the success of this acquisition.

Table 2. Factors that impacted the success of the Shasta acquisition by Nortel

The “top up” of the network management portfolio with Architel worked as expected. The Architel team saw the value in leveraging Nortel’s technology and sales to further penetrate the market, and this contributed to the new unit’s aligned objectives. These efforts benefited greatly from a compatible management team at the director level. The service provider portion of Clarify was less successful because the core technology team was retained in a different unit that had different priorities. This arrangement slowed the implementation changes required to fit the offers to the respective markets. Because the Clarify team was artificially split between Nortel units, they retained allegiance to two masters (their old core team and their new masters: Nortel), which negatively impacted performance.

The Cross-Leverage model used with Bay Networks was difficult to implement due to the relative large sizes of the two merging organizations and the overall complexity of the portfolio and market. Time was not an ally, as competitors were able to target various portfolio elements and reduce overall penetration. This put pressure on development budgets, ultimately resulting in program cancellations. There was drift in focus due to the multitude of potential opportunities, and the integration into the Nortel unit required the two teams to spend time educating each other on capabilities and strategies. The slow integration prevented this acquisition from performing to its potential.

Increasing the Potential for Success

The question is always how to maximize the probability of success with any M&A activity. Based on experience with these transactions, there are five key principles that, if followed, would increase the probability of any acquisition success. Many of these can be derived with common sense, however, based on the variable success in the transactions examined here, more attention should be paid to them.

Although selecting a model is not formulaic, in addition to putting appropriate business discipline around the transaction, betting on the team with momentum has a high impact. This involves consolidating with the new player (as seen with Aptis) or strengthening internal momentum (as seen in the Architel network management case). The team that best knows how to use the assets will have higher potential for market leadership.

In hindsight, the Shasta acquisition might have resulted in better performance had principle 5 been applied along with the Double Down model, thereby consolidating the smaller capacity VPN portfolio with the acquired company.

The requirement for choosing an appropriate integration model is not a surprise, but too often it is pushed aside during the excitement of the chase. Although M&A is a key tool for driving competitiveness, additional focus must be placed on integrating the assets of the companies to realize the anticipated value. As with most processes, success is based on people and the speed of execution. Success is easier to achieve with small acquisitions, but there is no reliable, formulaic model.

The five principles identified here, by looking at a subset of Nortel’s acquisitions, highlight the application of common business principles to the M&A space, including measuring results against a plan, making decisions quickly, clarifying purpose, supporting a winner, and ensuring strong team performance.

Understanding the characteristics of these different integration models and their success factors may allow a small company to promote its value and integration differently and avoid traps that can destroy the value of an acquisition. An acquisition is a material change, and it requires change in management structure, which is always difficult and bring with it potential benefit and risk. Principle 4 – betting on the team that has momentum in the market - is often the hardest for a company to do; however, allowing new players that have market momentum to drive the business is a foundation of any successful acquisition.


Rate This Content:
2 votes have been cast, with an average score of 5 stars

Peter Carbone is a successful executive known for his thought leadership, business acumen, and technology leadership. He is often called on to address new business and technology challenges. Peter is a pathfinder with a track record of creating innovative solutions, strategically managing technology and innovation, successfully launching and running new businesses, and leading business development initiatives. Peter has held CTO, R&D, and senior business positions in several high-tech companies, and he has led or been directly involved with several technology company acquisitions. Peter has been engaged as technical advisor to startups, is part of the faculty of an entrepreneur development program that has created >100 new companies, and has been on the boards of US-based Alliance for Telecommunications Industry Solutions (ATIS) and Coral CEA. He is past Vice-Chair of the Executive Committee of the Information Technology Association of Canada (ITAC) and Chair of an ITAC committee, which is focused on the Global Competitiveness of Canada’s Knowledge Economy.

Company Offers to Meet the Needs of Business-to-Business Customers: Customer Strategy and Orientation

<Companies develop and refine their market offer by creating new products for current and potential customers. Customer-focused research and development (R&D) is expected to shorten the time to market, improve cash flow, and reduce risks. It considers both customer strategy as well as customer orientation. In practice, this means that customer strategy directs current and potential...

TIM Lecture Series – Adventures in Innovation: Inside the Rise and Fall of Nortel

Reinventing the Wheel: Contextualizing Existing Innovations as a Path to Market Success

In the quest to create cutting-edge products, organizations often invest substantial time, attention, and capital in primary research and development (R&D). By themselves, these R&D investments to create avant-garde products may not provide good return-on-investment. In the context of Canadian businesses, there is a significant scarcity of resources available for R&D. What can...