Something changes when someone picks up a pen. When they start to draw, and rub things out, and put arrows between things. There is energy in the act of drawing, and it's that energy we want to try to promote and capture. People will become more engaged with strategy if you draw it with them.

The TIM Lecture Series is hosted by the Technology Innovation Management (TIM) program at Carleton University in Ottawa, Canada. The lectures provide a forum to promote the transfer of knowledge between university research to technology company executives and entrepreneurs as well as research and development personnel. Readers are encouraged to share related insights or provide feedback on the presentation or the TIM Lecture Series, including recommendations of future speakers.

The fourth TIM lecture of 2015 was held at Carleton University on August 13th, and was presented by Stephen Cummings, Professor of Strategic Management at Victoria University of Wellington in New Zealand. Cummings presented some of his recent research into strategic management and creativity, emphasizing why leading creative organizations (or organizations that seek to be creative) should map their strategy graphically.

Over three years and seven countries, Cummings and his colleagues tested over 1000 subjects' responses to the same strategy presented in different modes. The experiment confirmed what some strategy mavericks, from Mintzberg to Kaplan and Norton to Kim and Marbourgne, have suggested: that strategy presented visually can be far more effective than strategy conveyed in paragraphs or bullets of text. But, it also revealed some surprising reasons for this finding, and it offers some interesting insights into why, despite the effectiveness of visual presentation, the vast majority of organizations do not represent their strategies graphically.

The lecture first examined how to develop strategy in creative teams. Then, Cummings illustrated how drawing can create better engagement when creating and communicating strategies. Finally, he identified common reasons why companies are not using drawing, despite its benefits.

Based on this research, Cummings and his colleague Duncan Angwin, Professor of Strategy at Lancaster University in the United Kingdom, have recently published the book Strategy Builder: How to Create and Communicate More Effective Strategies (Cummings & Angwin, 2015), which shows how to creatively combine the best strategy frameworks to orient and animate strategy discussion and development around what winning looks like and how an organization will win. In researching the book, along with its associated app, StrategyBlocks Builder, Cummings and Angwin found that strategy is a rich field for frameworks (e.g., value chains, Seven Ss, BCG matrix, generic strategy matrix, 5 forces of industry, industry lifecycle), many of which are well known and frequently used. Indeed, the field lends itself to graphical representation, and yet current practice is to communicate strategy with text. The book – and the second part of Cummings' TIM Lecture – set out to encourage strategy builders to increase engagement by creating and communicating strategy by drawing it.

Cummings suggested that the more useful definition of strategy in this context comes from the economist Robert M. Grant, who simply stated that “strategy is about winning”. How winning is defined depends on the individual, whether it means making money, making the world a better place, improving efficiency, or some other goal, but if this is what strategy is aimed at, Cummings stated, "the key question is how do we get there... how do we win?". People enjoy thinking strategically – people enjoy figuring out how they are going to win and how they are going to get there – they find it intellectually stimulating. However, developing and communicating strategy using traditional approaches has become overly complicated, boring, and disengaging.

Cummings argues that a key to greater engagement, and therefore to more effective strategies, lies in embracing the act of drawing when creating and communicating strategy. He identified several reasons why drawing strategy should be helpful in these efforts:

Examples based on SWOT

To demonstrate how drawing can be more effective, Cummings demonstrated a better way to use the SWOT (strengths, weaknesses, opportunities, and threats) framework using real-life examples.

Given that SWOT is well-established tool (it is more than 50 years old) and its popularity endures, Cummings and Angwin asked why it was not delivering greater value. They argue that the problem does not lie in the tool itself, but rather in how it is used: as a text-generation tool rather than a drawing tool. A more graphical perspective shows that SWOT can be a useful strategy tool, provided it leverages the benefits of drawing.

In Strategy Builder, Cummings and Angwin show how SWOT can be a way of drawing upon and summarizing insights from other frameworks and developing strategy in a matrix of Os and Ts  versus Ss and Ws instead of just a set of four lists.

The idea is to seek interesting areas where collisions of ideas will happen. As shown in Figure 1, the general approach is to start by identifying the important aspects that are external to the organization: opportunities and threats. Next, the key internal aspects – strengths and weaknesses – are examined in light of the opportunities and threats identified earlier. Then, the body of the matrix is completed by collisions or interactions between the four aspects of SWOT. From this step, actionable objectives can be determined that, when achieved, will help the organization realize its overall vision of what winning looks like. 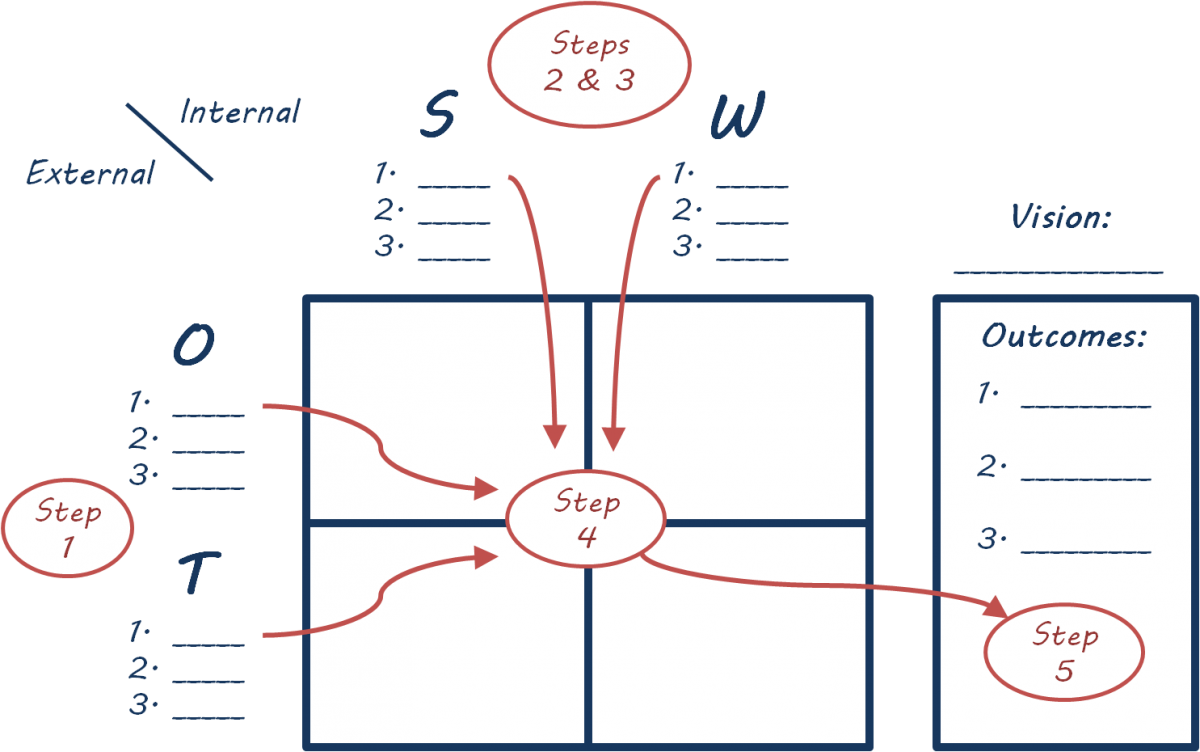 Figure 1. A sketch of the "strategy on a page" approach to graphical SWOT analysis by Cummings and Angwin (2015). Opportunities and threats are identified first, followed by strengths and weaknesses, which are then collided to identify actionable outcomes.

To demonstrate this approach, Cummings worked through several examples, including a case study of a local company in Ottawa. Prior to the lecture, Cummings met with Colin Pritchard, COO of InteractiveStudios, to develop their strategy using this graphical "collision"  approach to develop a "strategy on a page". InteractiveStudios is a startup founded by students at Carleton University and based in the Carleton-Led Accelerator, which is administered by the TIM program. The company creates digital directories for shopping malls, hospitals, and other large sites suited to interactive methods of wayfinding and analysis.

Figure 2 shows a version of the collision matrix drawn by Cummings during the TIM Lecture to illustrate the application of the strategy on a page idea applied to this case, which had been first developed in the earlier meeting.

In recreating the drawing for the audience, Cummings noted that there is a difference between drawing (the verb), and the value that can be derived in developing strategy by doing it, versus drawing (the noun), and the value it holds as a means to communicate strategy. Here, the act of drawing facilitated the creation of strategy for InteractiveStudios, but the output – the drawing itself, including its informality and shorthand notations – would not be easy to interpret by those who were not part of the exercise or did not witness it being created in real-time. Thus, a final version of the strategy can and should be further refined, for example by a graphic designer, and may need to be tailored to particular audiences (e.g., staff, investors, other stakeholders), with different styles, emphases, and degrees of detail. On this point, Cummings emphasized that:

"The real benefit is not in the drawings themselves – although they do add value – but in actually drawing it yourself: actually scratching on a piece of paper or on a whiteboard, drawing things, rubbing them out, having someone say 'That's wrong - I wouldn't have drawn it that way' and then debating it with them... that's where the real value is. This way, strategy becomes a social exercise - something that we share, something that we create together. If people work together to develop strategy – how to win and how to get there – then they become more engaged, and they want to see it succeed." 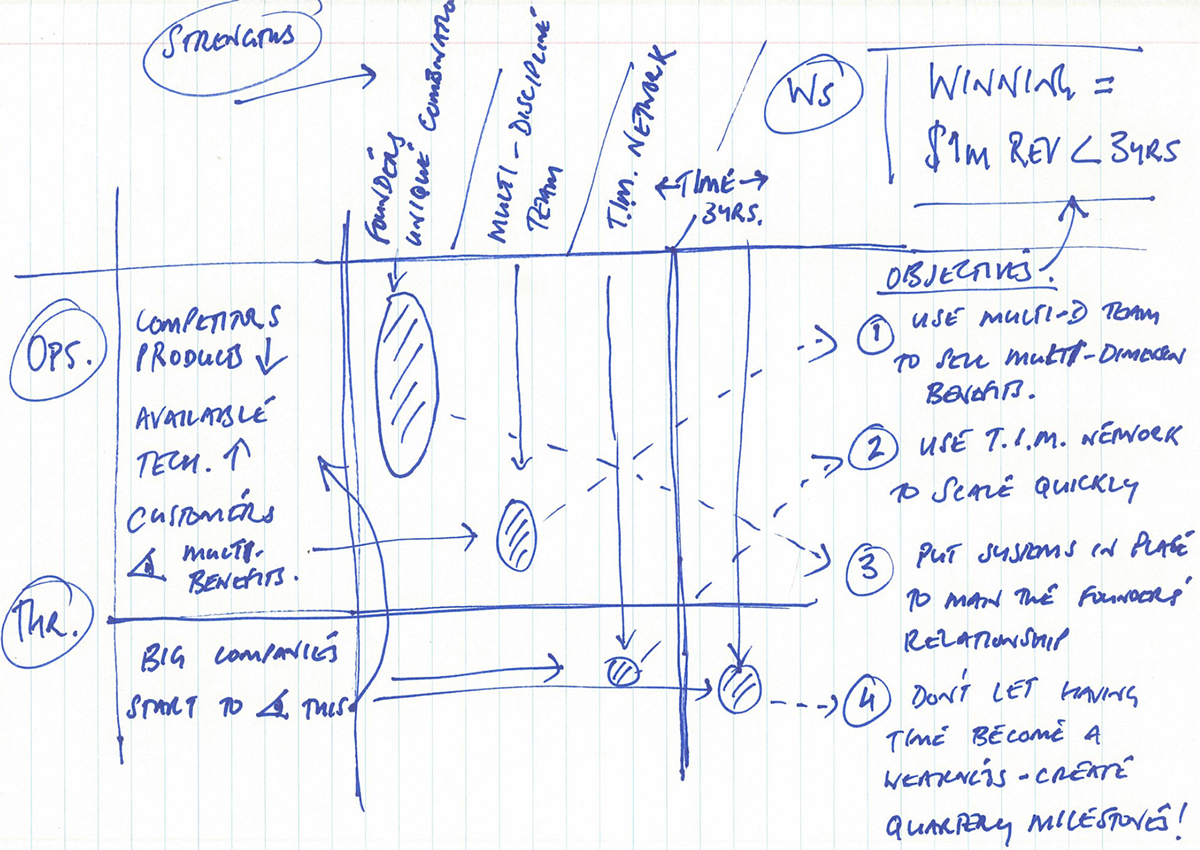 Figure 2. Graphical SWOT analysis of InteractiveStudies, as drawn by Stephen Cummings during his TIM Lecture on August 13th, 2015

In the final part of the lecture, Cummings examined reasons why organizations rarely use drawing to develop and communicate their strategy, despite the benefits discussed above. These ideas were based on the research experiment conducted with his colleagues Duncan Angwin and Urs Daellenbach (Cummings et al., 2014) described earlier. They researched the effectiveness of communicating the same strategy in different ways across over 1000 subject in 8 different countries: bullet points, paragraphs of text, or pictures). The key findings of this research are as follows:

The first two findings sit in contrast to paragraphs of text being the dominant form of communicating strategy today (and the larger perceived advantage of bullets over paragraphs). The last two findings provide some important caveats to drawing strategy which are picked up in the key conclusions of the lecture, listed below.

Finally, at the end of the lecture, the audience was asked to co-create a list of key takeaways, or lessons learned, from the presentation. These were:

This report was written by Chris McPhee and Stephen Cummings.

Stephen Cummings is Professor of Strategy and ICMCI Academic Fellow at Victoria Business School, Victoria University of Wellington, New Zealand. He has published on strategy, creativity, and management history in a range of journals including the Academy of Management Learning and Education Journal, Academy of Management Perspectives, Human Relations, Long Range Planning, and Organization Studies. He has also written, co-written and edited a number of books promoting creative approaches to strategy development. These include Recreating Strategy (2002), Images of Strategy (2003), Creative Strategy (2010), The Handbook of Management and Creativity (2014), and Strategy Builder: How to Create and Communicate More Effective Strategies (2015).

The editorial theme for this issue of the OSBR is Sales Strategy. While "marketing" is everything a company does to build interest in its offers, "sales" consists of converting these offers into cash. By "sales strategy," we refer to all sales planning and process development activities leading up to the actual selling of a product or service.

Understanding the Strategy-Innovation Link in an Era of Disruptions

Whereas innovation and strategy traditionally are treated as two separate fields of expertise and research, this conceptual paper aims to identify how strategy theory can be linked to recent developments within the innovation field. Innovation research seeks to explain the process of creating new products and services. Strategy research, in turn, intends to explain how businesses create...

The 3S Process: A Framework for Teaching AI Strategy in Business Education

A gap has emerged in teaching artificial intelligence (AI) in business education, where a style of curriculum based on strategy is missing. This article presents a new framework, the 3S Process, as a method for teaching leaders how to strategically adopt AI within their organizations. At a high-level, the 3S Process consists of three stages (Story, Strategy, and Solution), which are described...