The greater the power, the more dangerous the abuse.

Open source software foundations (OSSFs) create, enhance, and support open source technology such as tools, frameworks, operating systems, productivity software, and content management systems. These foundations act as keystones to anchor ecosystems of companies that generate revenue by developing and commercializing products based on the outputs produced by the foundations. Examples of OSSFs include the Apache Software Foundation, which supports the Apache HTTP Server among many other projects, and the Eclipse Foundation, which supports the Eclipse software development environment.

For foundations members, the benefits of OSSFs include: spreading development costs across participating members, increasing revenue generation through increased sales of complementary products, increasing the addressable market by competing more effectively across “technology stacks”, and acting as a common good through which member firms increase their goodwill and general welfare (Riehle, 2010).

In order to guide their operations and achieve their objectives, OSSFs develop governance policies, or bylaws, in at least four areas:

This article is structured as follows. First, prior research into OSSF governance is examined to provide context and background for the research described here. Next, the research method is described, including the definition of "power" that was applied to the context of OSSFs. Then, the results of the artificial neural network analysis of the content of the six foundations' bylaws are presented. Finally, conclusions are provided.

Prior Research in OSSF Governance

An overview of governance mechanisms uncovered in the studies of open source software development was provided by de Laat (2007). The mechanisms include spontaneous governance, internal governance, and “governance towards outside parties”. Spontaneous governance is characterized by communities of volunteers who enjoy the intellectual stimulus, have a desire to learn and improve their skillset, or need the code created for their current professional employment or personal use. These communities cross institutional boundaries, are self-directing, and have no formal control. Typically, the de facto leaders are the 20% that produce 80% of the code.

The second governance method, internal governance, is related to projects that use explicit and formal tools to co-ordinate and control open source software projects. Internal governance is characterized by six groups of tools: modularization, division of roles, delegation of decision-making, training and indoctrination, formalization, and autocracy/democracy (de Laat, 2007).

The third governance method is “governance towards outside parties”. This form of external governance is a result of outside parties, such as firms, governments, and non-governmental organizations taking an interest in the benefits of open source software. In order to deal with the challenges associated with creating software in the commons and the threats from patent infringement, this form of governance creates a “legal shell” around the project (de Laat, 2007).

O’Mahony (2007) discusses what it means to be community managed. From research on four large and mature open source software communities, she identified five principles for the community-managed governance model: i) independence of any one sponsor; ii) pluralism in diversity of contributors, management of conflict, and determination of leadership; iii) representation where contributing members can be represented in all community decisions; iv) decentralized decision making (e.g., how contributors gain access to decision-making structures); and v) autonomous participation in that all contributors are welcomed and members contribute on their own terms.

The objective of this research is to study how the management of an OSSF is centred according to the policies set out in its bylaws. In essence, the analysis was a search for the power centres in OSSFs. Power is generally defined as the ability to influence the behaviour of others with or without resistance (Wikipedia, 2012). For the purposes of this research, power was defined as the capability of one social actor to overcome a resistance in achieving a desired objective (Pfeffer, 1981). Power has many sources, including delegated authority, social class, material resource, charisma, knowledge, expertise, and so on (Pfeffer, 1981). In addition, French and Raven (1959) defines five bases of power: reward, coercive, legitimate, referent, and expert. This research examined legitimate power stemming from internalized values in one social actor, A, that another social actor, B, has a legitimate right to influence and who is obliged to accept the influence of B (French and Raven, 1959).

To examine the power relationships within OSSFs, the bylaws of the same six foundations studied by Xie (2008) were analyzed. Following Xie's criteria, to be included in the sample, an OSSF must:

These criteria ensure that the foundations studied are active, not-for-profit organizations in a common jurisdiction, and are operating under the same laws.

The six foundations selected for analysis were:

Each of these organizations has its bylaws available for download from its website. Inspection of the documents downloaded showed that, in general, the bylaws of the foundations incorporated the rules on the foundation’s management structure, the bylaws and the details of the membership agreement. The bylaws were downloaded from the foundations' respective websites and converted to text format for further analysis.

The bylaws were studied using content analysis (Neuendorf, 2002), which is also known as discourse analysis (George and Bock, 2011). For text-based documents, content analysis involves studying the language used in the documents to identify patterns in the content. Content analysis can be performed manually, but the process can more efficient and reliable if performed using software. One of the benefits of computer-aided text analysis is that it can be performed without bias arising from the researcher's personal experience and knowledge of the content being analyzed. Because of the textual nature of OSSF bylaws, computer-aided text analysis is well suited for studies such as described here.

Results of the Catpac analysis were plotted as dendrograms and conceptual maps, which were then used to locate the centres of power for each OSSF. The following two subsections report on results from the analysis of the Eclipse Foundation's bylaws only, to illustrate the process; the dendrograms and conceptual maps used in the analyses of the other foundations are available on request from the author. In the final subsection, the power-centre results for all foundations are described.

A dendrogram is method to illustrate the arrangement of data that clusters together from the result of performing cluster analysis. In a dendrogram, terms or concepts that appear together in the text under analysis are said to have a stronger relationship than concepts that are not close together. Figure 1 illustrates the dendrogram for the Eclipse Foundation; the output from the Catpac tool is shown in the lower portion of the figure, and a portion of the resulting "tree" is illustrated in the upper portion. Two strong clusters are found around the terms EXECDIREC (Executive Director) and ECLIPSE FOUNDATION. From the first cluster, we note that EXECDIREC has a strong relationship with COMMITTEE, OFFICER, ACTION, and COMMITTER. The SET and FORTH concepts cluster strongly together because they are used heavily in the bylaws in contexts such as “set forth in Section 3.8”. This cluster has a strong relationship with EXECDIREC. 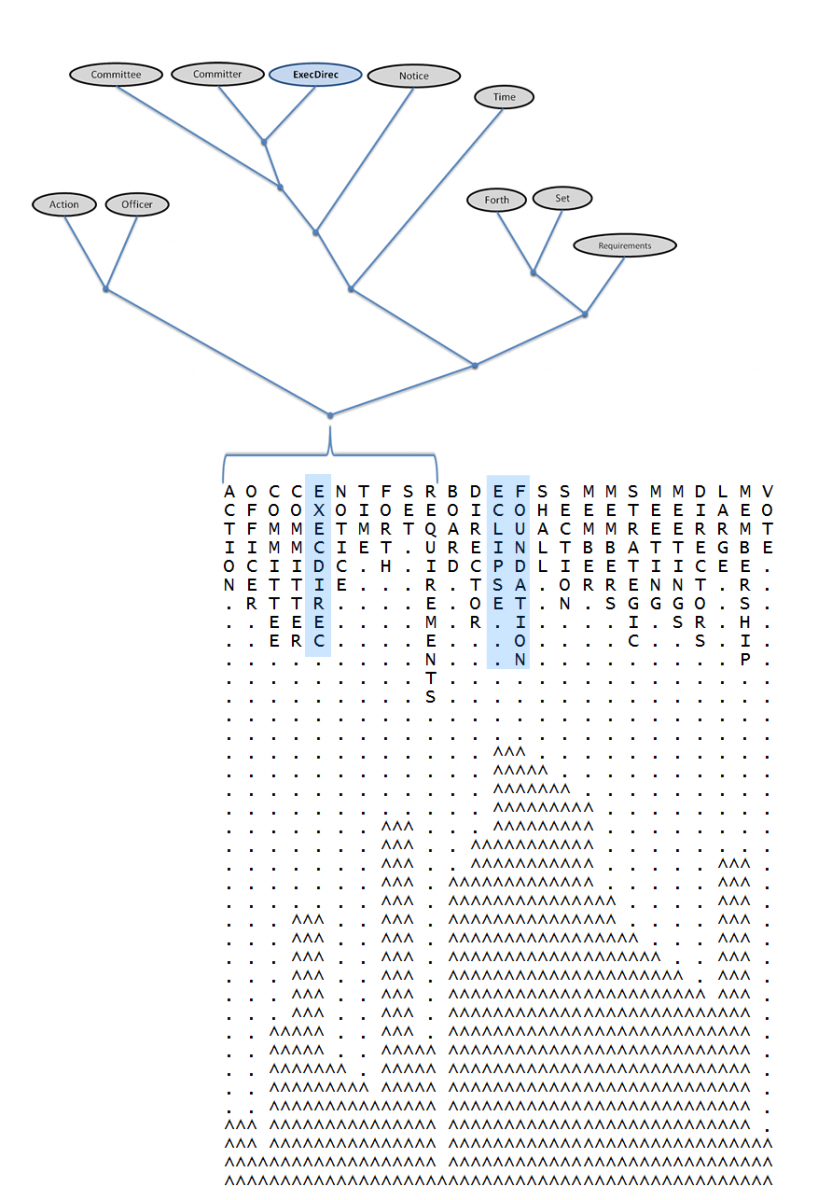 Centres of power for all six foundations

The content analysis showed that power in an OSSF is distributed across three groups: i) Members, ii) Chairman/President/Executive Director, iii) and Board of Directors. Thus, the relationships described in the previous subsections can be illustrated in a triangular diagram whose apexes represent these three groups (Figure 3). In the diagram, the power centre of each of foundation was plotted based on the results from the analysis of the dendrograms and conceptual maps for each OSSF. 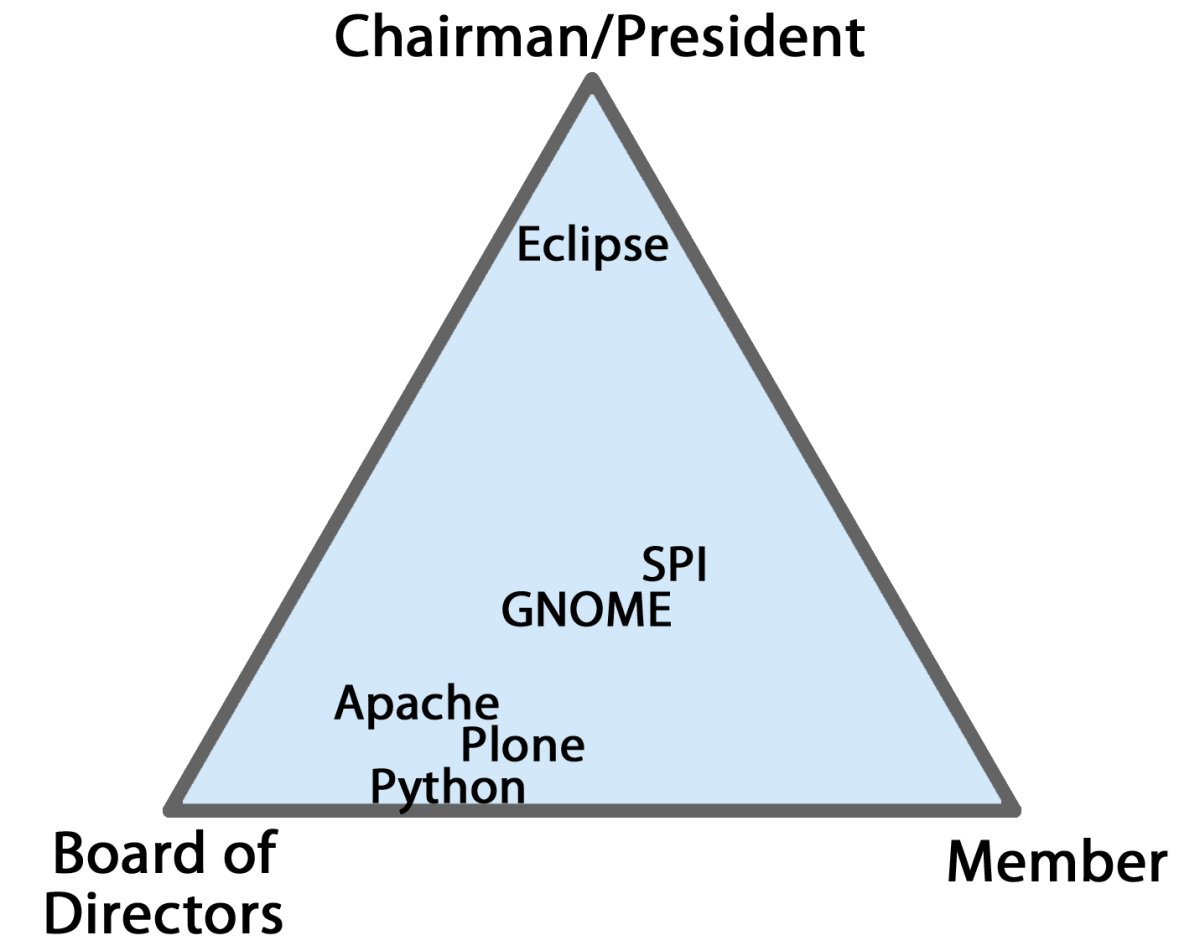 Three conclusions can be drawn from this study:

Finally, this research showed that the power in OSSFs lies within different groups, but provided no insight on why this is the case. Further studies into the underlying reasons for the power distributions observed in this study would contribute to a better understanding of how OSSFs operate and how they can be organized to provide greater benefit to their members.

Software Freedom Conservancy is another organisation that fits your description.

Hi: This is an interesting study. I have several questions.

I would note that one out of the six foundations chosen is a 501(c)6 and the others are all 501(c)3. This might skew your results on bylaws with respect to language. 501(c)3 are considered charities for the public good. 501(c)6 are trade organizations that support their members. Other interesting 501(c)6 organizations are the Linux Foundation, and the Outercurve Foundation. I'm curious why they weren't considered.

Another way to consider investigating open source software foundations is by considering the underlying developer community activity. Have you seen Henrik Ingo's work on size and activity versus foundation governance models? [http://openlife.cc/blogs/2010/november/how-grow-your-open-source-project...

Lastly, it felt like there was a leap from "management" to "power" in the presented analysis of the Eclipse Foundation. The executive director is responsible for managing the operations of the EF, and is designated authority to carry out those responsibilities, but I think you'll find it is the sponsor members that have the power to set direction. Maybe another way to say that is that Mike has power over how the strategy is carried out, but the strategy is set by the board. When you consider the analysis it may be of interest to consider board make up as well -- Outercurve has board positions reserved for non-sponsoring technical board members, as does the Eclipse Foundation.

OW2.org is another community good for this analysis.

Ludovico Prattico is a recent graduate of the Technology Innovation Management program at Carleton University in Ottawa. In addition to his Master's degree research at Carleton, he oversaw the operations, external content, and overall support of the Carleton Entrepreneurs program and recruitment of candidates for the Lead To Win program. Previously, he worked at Nortel Networks and Bell-Northern Research, where he led the Optical Networks architecture and standards development team, and the high capacity OC-48 hardware team with the responsibility for the development and introduction of the dense wavelength division multiplexing product. Mr. Prattico also holds a Bachelor of Engineering (Electrical) degree from McGill University.

Q&A. How is social network analysis used in studies of open source?

Social network analysis (SNA) can be used to study online communities, including free/libre open source software (F/LOSS) developer teams. SNA techniques provide insight into these communities and enable researchers to make predictions based on these insights. They can be used to model the nature and patterns of interactions that can be used as a predictor of group behaviour, trust, knowledge...

The GNOME Foundation Is All About People

As open source projects mature, they tend to join or create foundations which manage the project's financial and software assets, provide a marketing and legal entity, and sometimes help to set the direction of the project. As non-profit organizations, foundations have a specific structure defined by the jurisdiction in which they were formed. This structure typically includes a volunteer...