An Ethical Framework for Smart Robots

Star Wars: The Rise of Skywalker

This article focuses on “roboethics” in the age of growing adoption of smart robots, which can now be seen as a new robotic “species”. As autonomous AI systems, they can collaborate with humans and are capable of learning from their operating environment, experiences, and human behaviour feedback in human-machine interaction. This enables smart robots to improve their performance and capabilities. This conceptual article reviews key perspectives to roboethics, as well as establishes a framework to illustrate its main ideas and features. Building on previous literature, roboethics has four major types of implications for smart robots: 1) smart robots as amoral and passive tools, 2) smart robots as recipients of ethical behavior in society, 3) smart robots as moral and active agents, and 4) smart robots as ethical impact-makers in society. The study contributes to current literature by suggesting that there are two underlying ethical and moral dimensions behind these perspectives, namely the “ethical agency of smart robots” and “object of moral judgment”, as well as what this could look like as smart robots become more widespread in society. The article concludes by suggesting how scientists and smart robot designers can benefit from a framework, discussing the limitations of the present study, and proposing avenues for future research. 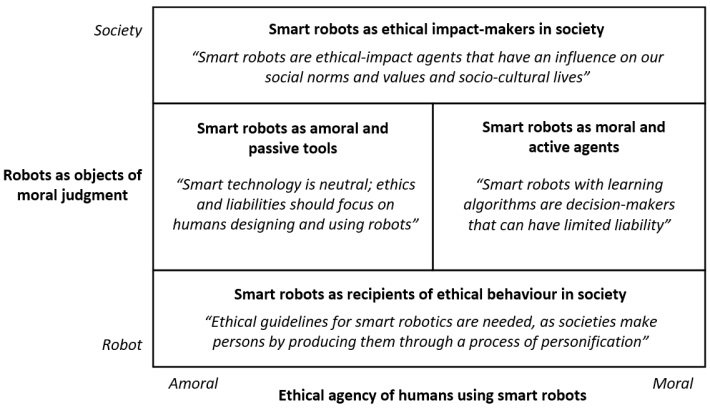 
Rate This Content:
36 votes have been cast, with an average score of 3.13 stars

Mika Westerlund, DSc (Econ), is an Associate Professor at Carleton University in Ottawa, Canada. He previously held positions as a Postdoctoral Scholar in the Haas School of Business at the University of California Berkeley and in the School of Economics at Aalto University in Helsinki, Finland. Mika earned his doctoral degree in Marketing from the Helsinki School of Economics in Finland. His research interests include open and user innovation, the Internet of Things, business strategy, and management models in high-tech and service intensive industries.

The Ethical Dimensions of Public Opinion on Smart Robots

Reinvigorating the Discourse on Human-Centered Artificial Intelligence in Educational Technologies

The increasing relevance of artificial intelligence (AI) applications in various domains has led to high expectations of benefits, ranging from precision, efficiency, and optimization to the completion of routine or time-consuming tasks. Particularly in the field of education, AI applications promise immense innovation potential. A central focus in this field is on analyzing and evaluating...

What makes a "smart region" smarter? We argue that it is the active orchestration of the regional ecosystem around concepts such as knowledge co-creation and exploitation, opportunity exploration, and capacity building. Simply adding to the proliferation of software developers in the area, stimulating the activities of business clusters around information technology, and providing...

Human factors research is still in its infancy in healthcare and other fields. Yet it has the potential to allow organisations and living labs to assess and improve innovation quality, while closely involving potential end users. "Human factors" involve a scientific focus on the interaction between individuals and systems with the goal of improving safety, performance, and user...