What impedes the success of late mover IT clusters despite economically favorable environments? A case study of an Indian IT cluster

The new industries are brainy industries and so-called knowledge workers tend to like to be near other people who are the same. Think of the City of Hollywood. People cluster. This means you have winning regions, such as London and Cambridge, and losing regions. The people who want to be top lawyers in Sunderland are hoovered up by London.

The Information Technology (IT) industry in India, is one of the major contributors to the country’s growth story. It is organized in a few strong and dominant clusters across the country. Recent research focuses on the emergence, growth and success of the seven big IT clusters that account for 96.55% of total software exports from the country. Unlike the six successful late mover clusters, there are several other late mover IT clusters that have not experienced similar growth. Why do some of the late mover IT clusters in India succeed while others fail to take off despite favorable economic conditions? This paper applies a case study method to answer this research question by examining a single cluster, using both primary and secondary data. The paper concludes with a new framework to explain how an IT cluster lacks the motivation to succeed when it has to gain traction alongside the competing dynamics of traditional businesses. We find this to be the case more so when traditional businesses are thriving and growing. 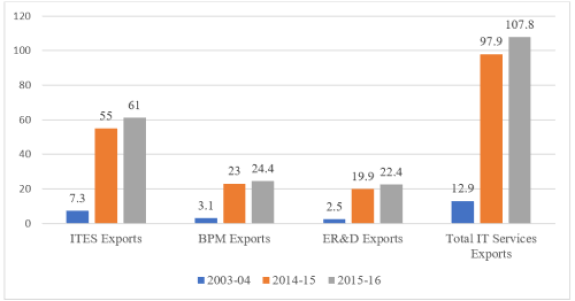 Figure 1. Indian IT industry Exports (USD)
Source: Rao & Balasubrahmanya, 2017 and Nasscom reports
Indian IT clusters have grown from a low value industry to a major player in the global ICT industry. The national output commands a 55% share of the global market for IT services. Fig 1. Captures the growth of IT industry exports in three sectors: ITES, Business Process Management (BPM), and Engineering and Research and Development (ER&D).  An increase in BPM and ER&D activities indicates Indian IT clusters moving towards high-end value-added services. Another indicator of IT clusters moving up the value chain in India is the increasing number of US patents accumulated by Indian companies (Rao & Balasubrahmanya, 2017).
3.1 Success factors of Indian IT clusters
According to Rao and Balasubrahmanya (2017) and Khomiakova (2007), the major contributing success factors for growth in Indian IT clusters are:
1. Vast pool of low-cost and high-quality talent fluent in English language
2. Presence of premier educational and innovation-based research institutions
3. Historical concentration of innovative high-tech firms from diverse industries with IT needs
4. Temperate climate
5. Entrepreneurial culture
5. Connections between local entrepreneurs and MNCs
6. Supportive state and local government policies, establishment of Software Technology Parks of India [STPI]
7. Indian expatriates and returning Indians with education and experience abroad and connections to MNCs
8. Attractive work environment with acceptable level of social infrastructure to raise a family
9. IT firms with operational excellence that have gained cost, quality, and security leadership, as well as a global delivery model
10. Chance
3.2 Prominent IT clusters in India
The Indian IT industry is organized into seven prominent clusters: Bangalore, National Capital Region (NCR), Chennai, Hyderabad, Pune, Mumbai, and Kolkata.
Several firms that develop computer software and provide information technology (IT) services have emerged in and around Bangalore, a city located in India’s southern state of Karnataka. The Bangalore cluster is the largest in terms of sales and exports. It also houses the most technically advanced firms and is known as the Silicon Valley of India.
The Bangalore cluster has moved up the value chain of IT services from a low-value to intermediate-level super cluster and is now at the threshold level of becoming a high-value cluster.  There is an increased level of both intra-cluster interaction within Bangalore and extra-cluster interaction between Bangalore and other clusters in India and abroad, due to diaspora and the influx of  MNC affiliates, and the location of affiliates of Bangalore based Indian MNCs elsewhere (Rao & Balasubrahmanya, 2017).
Anil Nair et al. (2007) explained the factors behind the recent growth and success of Bangalore as a globally competitive IT cluster. We look at this using Porter’s diamond model as follows:
Table 1. Factors contributing to success of Bangalore IT cluster 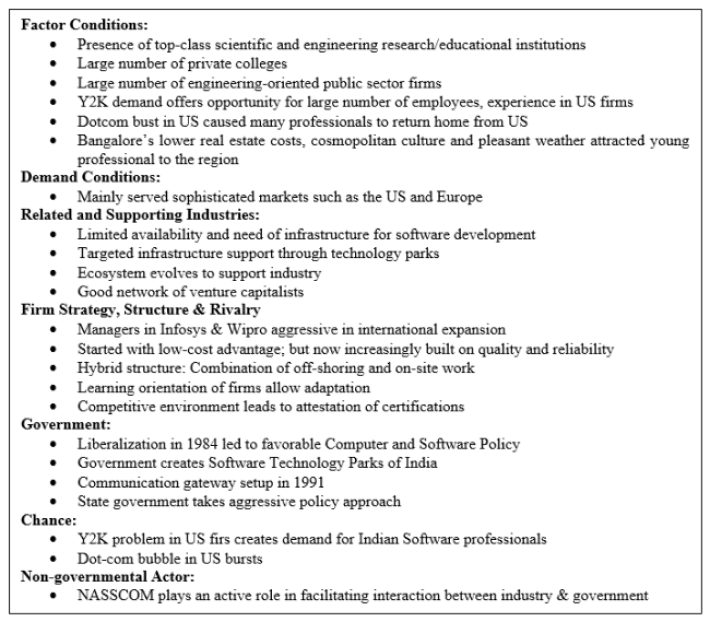 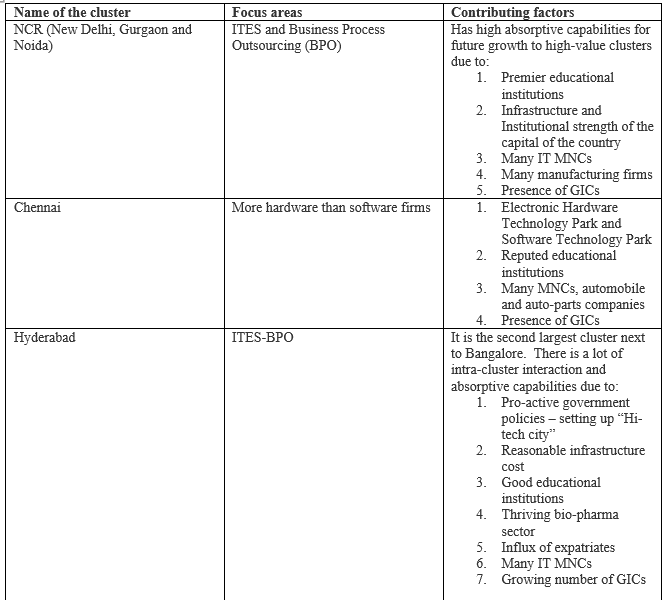 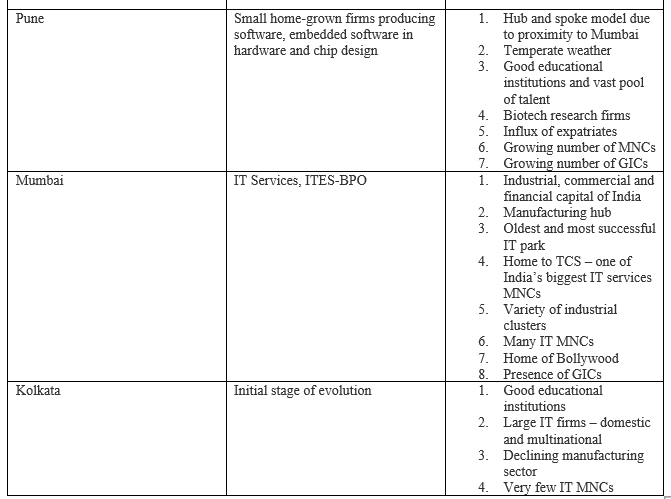 As can be seen from Table 2, Hyderabad is modeled as a state-anchored platform, NCR, and Chennai are modeled as satellite platforms, while Pune and Mumbai are modeled as hub and spoke platforms. Hyderabad, NCR, and Chennai are moving from low-value to intermediate level clusters in terms of quality of services produced, with many Global In-house Centers (GICs) serving ER&D, while Kolkata and Pune remain as low-value satellite model clusters.  It does seem though, that Pune has the potential for increasing intra- and extra-cluster interactions in the future.
All seven clusters have educational and research bases, a supply of talent, diverse set of industries, and are located in and around large cities. These clusters are attractive places to work and raise a family with minimally expected amenities in the form of hospitals, schools, and other services (Rao & Balasubrahmanya, 2017).  Most cities in India, including the above seven clusters, are plagued with infrastructural problems, such as traffic congestion, power outages, and rising housing costs (Rao & Balasubrahmanya, 2017). Not only that, India has a low score in application indicators, such as bandwidth per internet user, annual telecom investment, internet users per 100 people, access to wireless broadband, lack of high-speed connectivity, and others. (Rao & Balasubrahmanya, 2017).
4. The research gap and description of methodology used
Table 3 presents a framework for explaining the models, activities, success factors, and performance of IT clusters based on the above literature. Indian low value clusters are mostly modeled on a satellite platform that derives most of its clientele and activities from work outsourced by large firms or MNCs. They all have moderately supportive governmental policies and limited economic resources. The intermediate level clusters in the form of Hub and Spoke, Satellite, or State Anchored platforms, have greater absorptive capacity, greater intra- and extra-cluster interactions, and provide higher value-added services, such as BPM and ER&D. There are more GICs in these clusters, and valuable networks with expatriates as well. This allows knowledge transfer, absorption, and potential for future innovation and knowledge generation.
These clusters contribute significantly to economic growth in India. High value clusters such as India’s Silicon Valley can be Hub and Spoke, Satellite, or State Anchored platforms. These have an advanced level of innovation, knowledge generation, intra- and extra-cluster interactions. These clusters are economic growth drivers that produce radically innovative, break-through technologies. So far, India does not have a high value IT cluster. Investment will follow ideas and growth. Therefore, venture capital investors are more active in the intermediate level and high value clusters.
Table 3. Nature, models, activities, success factors, and performance of IT clusters Title 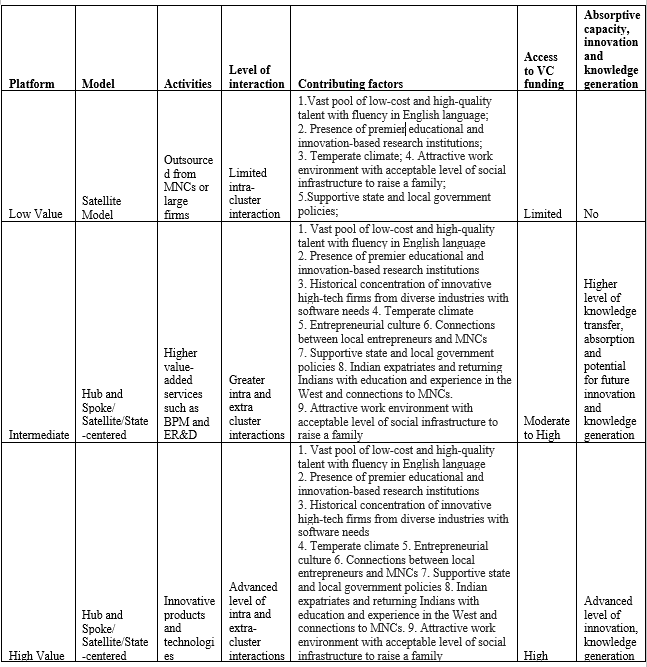 Appendix 1. List of Private Sector IT Firms Approached for the Study. 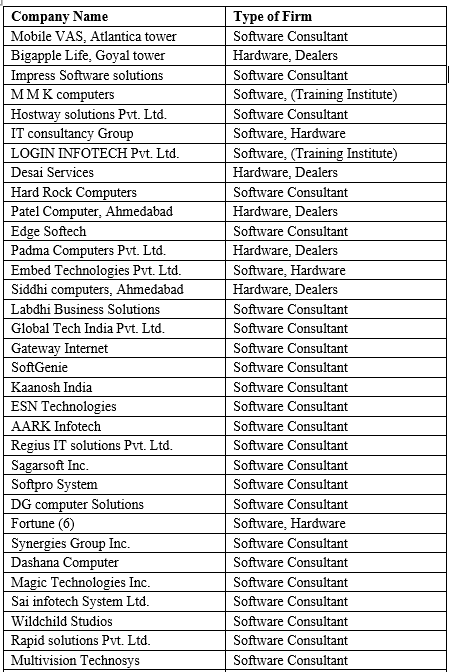 
Rate This Content:
20 votes have been cast, with an average score of 2.95 stars

Dr. Harini Mittal is a highly experienced educator with expertise in curriculum development and college instruction and is passionate about student advocacy. She has been actively involved in various activities, initiatives, teaching, mentoring, and research in the field of finance, innovation and entrepreneurship. She has also authored/co-authored and edited books and journal articles. She received her Ph.D. in Management, from the Institute of Management, Nirma University, Ahmedabad. She is currently working at Bronx Community College, City University of New York (BCC-CUNY) as an Assistant Professor in the Business and Information Systems Department. Dr. Mittal is a founding board member and treasurer of Emblaze Academy, a charter school located at South Bronx. She is also a consulting country specialist with Aperian Global.

Dr. Punit holds a doctorate in Innovation Management from IIT-Kharagpur. He is presently serving Nirma University with the Institute of Management in the capacity of Assistant Professor. He has been a Research fellow of DSIR-TePP (Department of Scientific and Industrial Research) and has handled key innovation funding and commercialization programs. His area of teaching and research includes entrepreneurship development, Innovation management, family business practices, women entrepreneurship development, entrepreneurship and innovation ecosystem setups etc. He has contributed to setting up research academic and practice-based entrepreneurship ecosystems at several institutions. He publishes and reviews in several journals while contributing articles on strategic and geopolitical affairs for US Naval Institute defense news, and shares his opinion in Nikkei Asian Review.

Devang Rohit is a senior SAP professional and team leader. He is passionate about IT entrepreneurship and ERP applications. He received his MBA in Project Management from CEPT University and B.E in computer engineering from L.D. College of Engineering, Gujarat University.

Comparing the Entrepreneurial Ecosystems for Technology Startups in Bangalore and Hyderabad, India

Technology startups are gaining increasing attention from policy makers the world over because they are seen as a means of encouraging innovations, spurring the development of new products and services, and generating employment. Technology startups tend to thrive when inserted in a conducive entrepreneurial ecosystem. Therefore, ecosystem promotion is being given increasing policy support....

Nations built on innovation, entrepreneurship, and production are able to dominate the world economy. However, risk taking has traditionally been discouraged in developing nations. The uncertainty and financial insecurity associated with entrepreneurial activities are the greatest barriers that budding entrepreneurs need to overcome in order to transition into successful entrepreneurs. This...

In spite of having a large publicly funded science and technology infrastructure and a sizeable education base, India has not been able to realize its innovative potential due to a fragmented innovation ecosystem. The government of India has taken many initiatives towards strengthening the innovation ecosystem, the most important of which are: i) the establishment of the National Innovation...

Q&A. What Barriers Do Women Face in Becoming High-Tech Entrepreneurs in Rural India?