“A leader needs enough understanding to fashion an intelligent strategy.”

By combining multiples sources of data to create a new application, mashups represent a powerful source of innovation. Together, the various data providers, developers, mashup platforms, and users constitute an ecosystem that depends on innovation from these various players for its growth and success. This article summarizes recent research into the network structure of the mashup ecosystem, along with the positions and roles of entities within it. This research illustrates analytical methods for identifying key players in an ecosystem, while delivering new insights into the structure of the mashup ecosystem. Finally, the implications of these findings for entrepreneurs and incumbents are discussed.

Facilitated by the evolution of Web 2.0, the mashup ecosystem grew and evolved through interactions between data providers, developers, mashup platforms, and users (Weiss and Gangadharan, 2010). A mashup is a custom web application that uses various data sources to create and deliver new services. Data providers offer developers access to their data via application programming interfaces (APIs). Using these APIs, developers are able to query the data and build mashups that combine data from multiple APIs (Yu and Woodword, 2009). Examples of API providers include Google and Yahoo, who release data through the Google Maps and Yahoo Search APIs, which can be used by independent developers to create mashups.

The mashup ecosystem relies on innovation for its growth and success. The ecosystem is supplied with raw ingredients through data and APIs, and the Internet provides the environment to support the creation of new applications by developers (Fichter, 2009). The mashup ecosystem is unique because its growth is strongly influenced by independent players. Even though API providers supply the data and the tools to access the data, they are not the major driving force for mashup development. That process lies in the hands of developers.

As part of the author’s recent Master’s degree in the Technology Innovation Management program at Carleton University in Ottawa, the mashup ecosystem was studied to identify its key players.

The API and mashup data used to establish the structure of these networks were manually extracted from the ProgrammableWeb, one of the largest online repositories of mashups and APIs. The extracted data included mashups created between September 2005 and August 2010.

Once the API affiliate network and API provider networks were established, four distinct methods of network analysis were applied to these networks. These techniques examined different structural and positional properties in the two networks and identified key players in each. Descriptions of each type of analysis and their key findings are provided in the sections that follow. 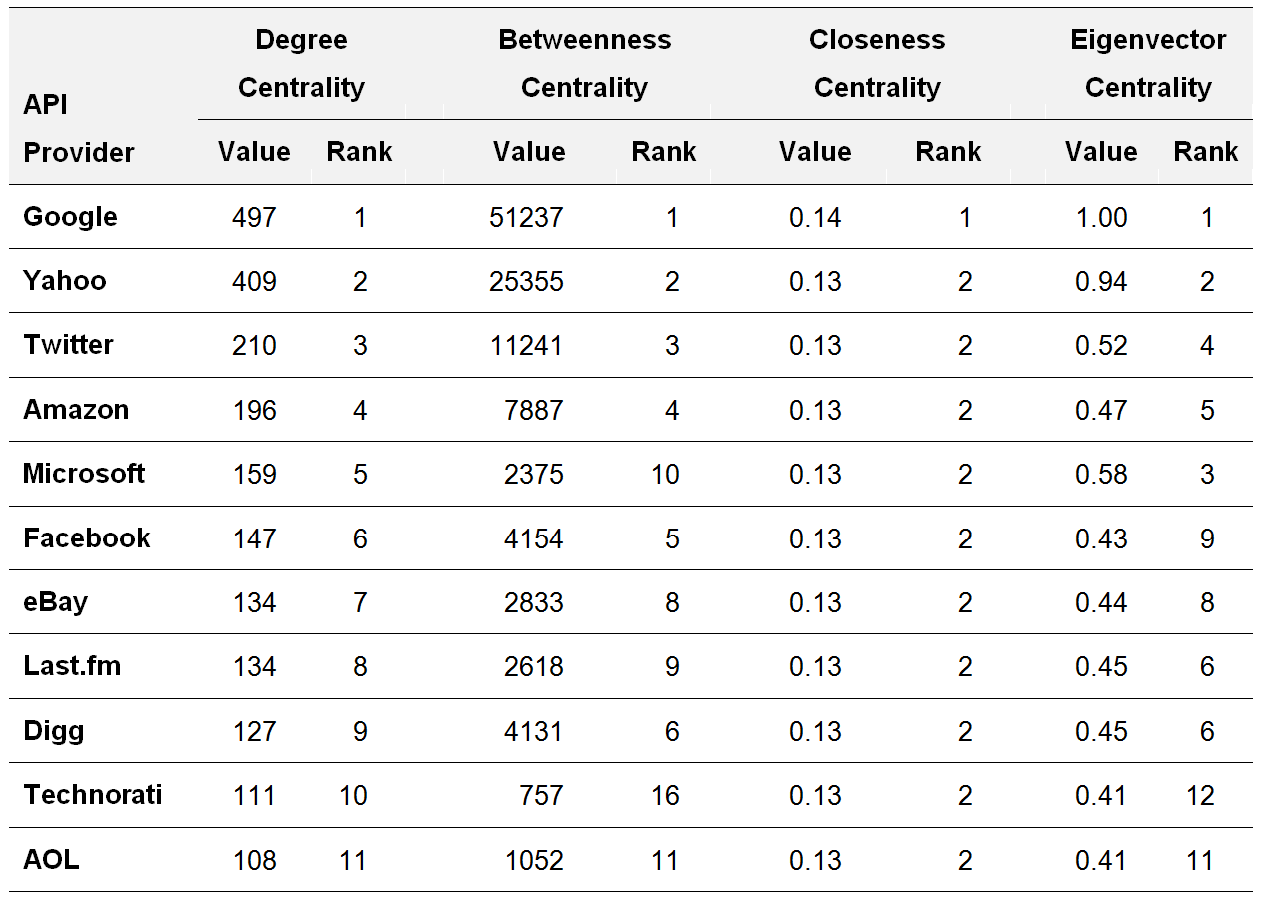 This algorithm identifies communities of nodes within a network (Girvan & Newman, 2002). Communities are sub-networks of nodes that are more densely linked internally than they are with the remainder of the network. In the mashup ecosystem, these communities can be described as collectives, because the connectivity of nodes is driven by user innovation rather than company alliances and associations.

Analyses of the key player problem revealed two similar sets of API providers, as shown in Table 2. It is not surprising that Google and Yahoo belong to both sets of key players identified by the two algorithms because they release a large number of APIs into the mashup ecosystem. However, API providers like Twitter, Facebook, Digg, and Box.net release one API each yet they rank as one of the key players. The popularity of these specialiaed APIs is likely due to the nature of the data they provide and their general appeal to mashup developers. 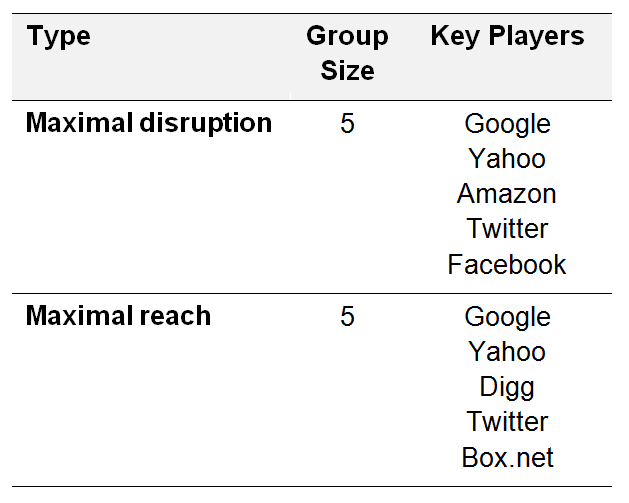 This technique measures a node’s importance on its direct and indirect neighbours. The effect of a node outside its immediate neighbourhood can be determined by measuring its influence on other nodes with a pre-defined distance.

The results revealed that API providers exert different levels of influence on their immediate neighbourhood. Also, some providers (such as 23, 12seconds.tv, and 43Things) show stronger levels of influence on more distant neighbours relative to other providers (such as Google, Amazon, and Yahoo). AOL maintains its positional importance, suggesting that they occupy a unique position in the network. One can speculate that companies like Google and Yahoo have many direct connections to other providers on the periphery of the network but have fewer non-direct connections to other providers. And hence, their influence is highest on their direct neighbours. Similar to what was observed in the API affiliate network, these providers gain importance due to their high eigenvector centrality measurements and their connections to more central providers in the network.

Implications for Entrepreneurs and Incumbents

2. This research can help incumbents and entrepreneurs when developing business strategies in the mashup ecosystem. As suggested by Weiss and Gangadharan (2010), new entrants can follow or complement the strategies of key players to achieve successful entry into the ecosystem. This is also true for incumbent providers who are looking to improve their position and their role within the ecosystem.

Monique Bardawil recently completed her Master's degree at Carleton University with a thesis entitled "Identifying key players in the mashup ecosystem." Her research interests are social network analysis, product architecture and design, and Web 2.0. She holds a Bachelor of Engineering degree in Systems and Computer Engineering from Carleton University and a Bachelor of Science degree in Biochemistry from McGill University.

Competition in the Mashup Ecosystem

This article explores the nature of competition...

Niche Formation in the Mashup Ecosystem

Mashups enable end-users to "mix and match" data and services available on the web to create applications. Their creation is supported by a complex ecosystem of i) data providers who offer open APIs to users, ii) users who combine APIs into mashups, and iii) platforms, such as the ProgrammableWeb or Mashape, that facilitate the construction and publication of mashups. In this article...

Mashups enable, users to "mix and match" data and user interface elements from different online information sources to create new applications. The creation of mashups is supported by a complex ecosystem of interconnected data providers, mashup platforms, and users. In our recent research, we examined the structure of the mashup ecosystem and its growth over time. The main...

On June 11, 2008, Michael Weiss from Carleton University delivered a presentation entitled "Open APIs, Mashups and User Innovation". This section provides the key messages from the lecture. Michael's lecture examined the structure of the mashup ecosystem as well as implementation issues, including licensing.