Competition in the Mashup Ecosystem

“It is the recombinant nature of revolutionary innovations that contribute to their dramatic effects."

This article explores the nature of competition within the mashup ecosystem by focusing on competitive actions taken by API providers and their link to mashup network structure. The resulting insights help entrants and incumbents refine their competitive strategies within this complex and unique environment.

Over the last decade, the Internet has played host to an extraordinary explosion of developer innovation in the form of mashups. Built using web services exposed by third-party data providers via APIs, mashups combine data from multiple APIs into innovative web applications that often meet a long-tail need and have been hailed as "the next major new software development model."

The mashup ecosystem is defined as the combined mashup platforms, data providers, and users that support the creation of mashups (Weiss & Gangadharan, 2010). ProgrammableWeb.com, an online database tracking the mashup ecosystem, lists 33 APIs within the “mapping” category alone, showing healthy competition amongst API providers and representing a rich opportunity to explore it through research.

While mashup developers are motivated by the enjoyment of niche, long-tail problem solving and the opportunity to create novel applications with powerful, highly developed technologies (Floyd, Jones, Rathi, & Twidale, 2007), data providers gain significant benefits by offering an API, including free advertising and exposure, a new source of revenue, and free research and development. This article focuses on exploring competition in this space and providing insight to new entrants and incumbents offering an open API.

Uniqueness of the Mashup Ecosystem

The mashup ecosystem is a unique and complex competitive environment, as exemplified by the following characteristics:

Competitive Actions in the Mashup Ecosystem

As part of the author’s recent research, 1277 blog entries spanning five years and pertaining to eight mapping APIs offering similar functionality were categorized into 16 competitive action categories. For example, a blog entry from Google Maps announcing that reverse geocoding was added to the API would be classified as "product development." This process assumed that actions published on an API provider’s blog comprise a competitive action. Table 2 outlines the 16 categories and their subsequent refinement to six final categories specific to the mashup ecosystem. 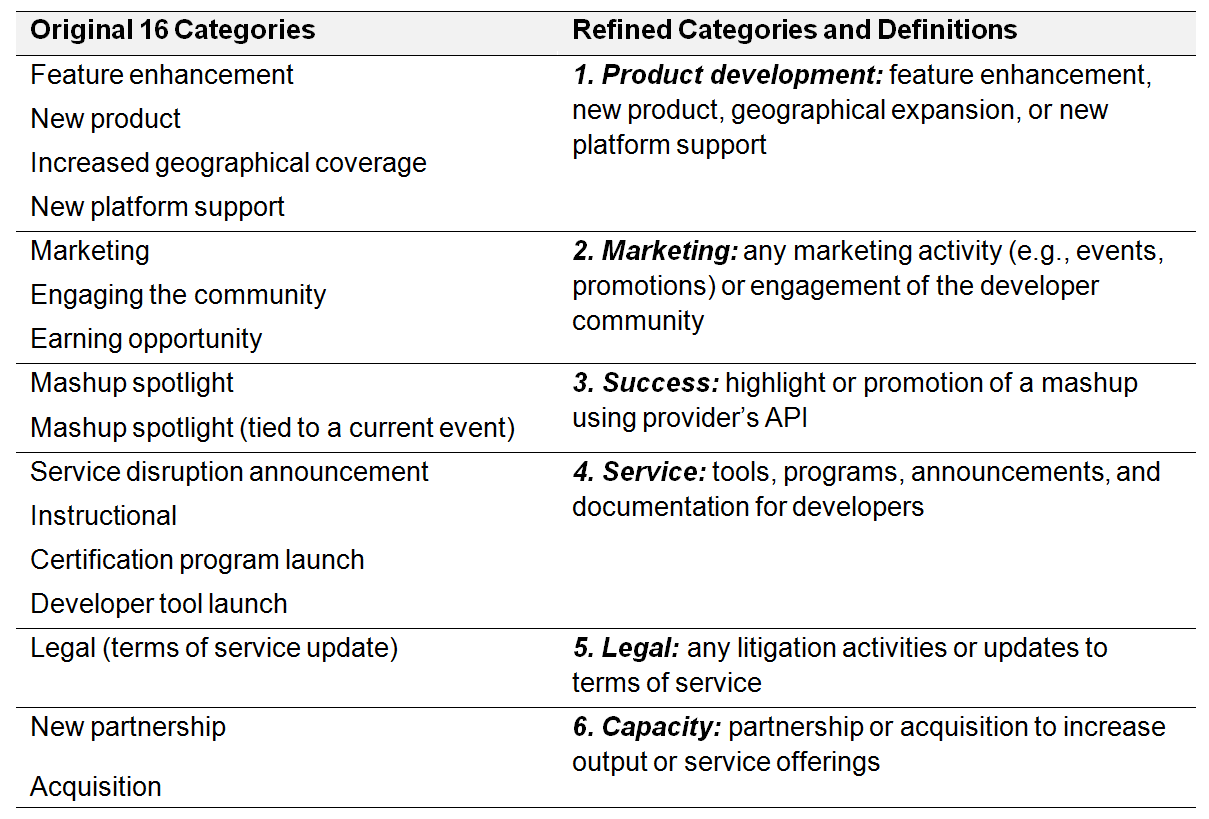 Examining the distributions of these competitive actions across the eight mapping APIs yielded the following insights:

1. Within the distributions of competitive actions, two action categories were universally dominant: feature enhancement and mashup spotlight. While feature enhancement can be considered an established category in competitive strategy theory (Ferrier, 2001) – that is, corresponding to the product category - the mashup spotlight category is unique to the context of this research. This indicates that API providers are making efforts to promote the work of developers using their API, which is a testament to the increasing importance of product and service development by users.

2. The three oldest and most popular APIs in the research population are Yahoo Maps, Google Maps, and Bing Maps, based on their date of entry into the ProgrammableWeb database and subsequent activity. These three APIs were consistently in their top four categories within the distribution: marketing, mashup spotlight, feature enhancement, and instructional. This demonstrates consistency of behaviour in the major players in the mashup ecosystem, but may also indicate the relatively vast resources available to the industry-heavyweights that are providing these three APIs: Yahoo, Google, and Microsoft.

3. While marketing and feature enhancement correspond to established categories, the mashup spotlight and instructional categories emphasize service to the developer community. This further demonstrates a commitment from the major players in the mashup ecosystem to support user innovation.

4. Lastly, the newest and least popular APIs within the research population were Cloudmade, Multimap, and Maponics. The providers of these APIs focused more on engaging the community and less on providing instructional services to developers. This may indicate that resources are more focused on promotion and growth for new entrants to the mashup ecosystem, and may also imply a lifecycle model where entrant behaviour evolves into incumbent behaviour. The providers of these less-popular APIs may also benefit from emulating the major players by improving service to the developer community.

A Network Within the Mashup Ecosystem

Approaching the mashup ecosystem as a network invites the use of social network analysis to explore how APIs are connected via mashups and the overall characteristics of the network. Analysis of this network reveals the different ways in which mashup developers combine APIs to create original applications – specifically, an API’s access to resources, its popularity, the number of times it has been combined with other APIs, and the diversity of those combinations. The network can be visualized as nodes and links, as illustrated in Figure 1, which shows a subset of the API network used in this research. Here, the nodes represent APIs and the links indicate APIs that have been used together in a mashup.

Figure 1. A Subset of the API Network

In the author’s recent research, applying social network analysis techniques to the API network and testing relationships between network structure and competitive actions revealed several insights. Overall, network position was not observed to have a significant influence on competitive action patterns; that is, API providers do not appear to gain advantage from resource asymmetries in the API-API network. They may also simply give little regard to developer activities and existing mashups in their competitive strategies. However, an isolated result suggested a possible relationship between the volume of competitive actions taken and the diversity of combinations with other APIs. This may indicate that a broader popularity within the mashup ecosystem may enable or drive increased competitive actions, and it suggests API providers may benefit from nurturing mashup combinations with many different other APIs.

Furthermore, APIs pairs that were frequently combined showed very different competitive action patterns over time. This may be attributed to API providers’ efforts to differentiate themselves in competitive strategy, possibly to deter imitation, which is a threat in the context of modularization (Ethiraj, Levinthal, & Roy, 2008). Other research indicates that gains in market share increase when top firms seek a unique approach to their diversity of product offerings, technological leadership, and branding (Ferrier, Smith, & Grimm, 1999), and API providers may be well-served to diversify their competitive strategies, especially when faced with close competition for mashup market share.

API providers have much to gain in offering an open API, including revenue, exposure, and free research and development. However, the mashup ecosystem is a complex and unique competitive environment. API providers take specific actions in their competitive strategies, and they place a strong emphasis on frequent feature enhancements and promotion of third-party developer mashups. This demonstrates their commitment to user innovation. New entrants to the mashup ecosystem may gain an advantage in focusing on service to developers.

Competitive action is not strongly embedded in the API network structure. However, entrants and incumbents would be well served by examining this network structure and their position within it to observe the volume, variation, and innovation of mashups formed with other APIs and adjusting their competitive strategies accordingly. The mashup ecosystem remains rich fodder for competitive dynamics research and a cutting-edge playing field for data providers looking to disrupt their markets and gain a new competitive edge.

Amanda Shiga recently completed the requirements for the Technology Innovation Management Master's program at Carleton University. Her thesis, entitled "Mashup network ecosystem structure: A driving force of competitive actions?" examined competition and network structure in the mashup ecosystem. Prior to her work at Carleton, Amanda received her B.Sc. in Computer Science at the University of Ottawa. Amanda has over 10 years' experience delivering web-based business solutions and currently leads the CMS Practice Area at non~linear creations.

By combining multiples sources of data to create a new application, mashups represent a powerful source of innovation. Together, the various data providers, developers, mashup platforms, and users constitute an ecosystem that depends on innovation from these various players for its growth and success. This article summarizes recent research into the network structure of the mashup ecosystem,...

Niche Formation in the Mashup Ecosystem

Mashups enable end-users to "mix and match" data and services available on the web to create applications. Their creation is supported by a complex ecosystem of i) data providers who offer open APIs to users, ii) users who combine APIs into mashups, and iii) platforms, such as the ProgrammableWeb or Mashape, that facilitate the construction and publication of mashups. In this article...

Mashups enable, users to "mix and match" data and user interface elements from different online information sources to create new applications. The creation of mashups is supported by a complex ecosystem of interconnected data providers, mashup platforms, and users. In our recent research, we examined the structure of the mashup ecosystem and its growth over time. The main...

On June 11, 2008, Michael Weiss from Carleton University delivered a presentation entitled "Open APIs, Mashups and User Innovation". This section provides the key messages from the lecture. Michael's lecture examined the structure of the mashup ecosystem as well as implementation issues, including licensing.