Men rise from one ambition to another: first, they seek to secure themselves against attack, and then they attack others.

Botnets have become one of the fastest-growing threats to the computer systems, assets, data, and capabilities relied upon by individuals and organizations worldwide. Botnet takedown initiatives are complex and as varied as the botnets themselves. However, there is no comprehensive database of botnet takedowns available to researchers and practitioners, nor is there a theoretical model to help predict the success or failure of future takedown initiatives. This article reports on the author's ongoing research that is contributing to both of these challenges and introduces a set of hypotheses relating to the performance of botnet takedown initiatives. In addition to researchers, the article will be of particular interest to personnel in technical, legal, and management functions of organizations interested in improving the quality of their communications and accelerating decision making for the purpose of launching and operating botnet takedown initiatives. It will also be of interest to entrepreneurs who wish to launch and grow cybersecurity ventures that provide solutions to botnet and malware threats.

Botnets are a persistent threat to all Internet users. They are networks of computers infected with malicious software that are connected over the Internet and can be instructed to carry out specific tasks – typically without the owners of those computers knowing it (Nadji et al., 2013; Plohmann et al., 2011; Whitehouse, 2014). Those who control botnets use them to steal identities, personal and financial information, illicitly gain access to bank accounts; distribute spam e-mails; shut down websites by overwhelming them with traffic (i.e., distributed denial-of-service or DDoS attacks); launch new custom-made botnets; or spread malware and ransomware (Cremonini & Riccardi, 2009; Plohmann et al., 2011; Zeidanloo et al., 2010).

Over the last 20 years, botnets have developed "from a subject of curiosity to highly sophisticated instruments" for illegal activities (Czosseck et al., 2011). Botnets increase the computing resources available to cybercriminals exponentially without revealing their identities (Feily et al., 2009; Whitehouse, 2014). Stealth, resilient, and cost-effective botnets have been designed to operate using general overlay networks such as those offered by Skype (Nappa, et al., 2010).

As of late 2014, a readily accessible comprehensive database on botnet takedown initiatives was not available. Responding to the need to develop such a resource, a Google search (using keywords such as "botnet takedown", "botnet disruption", and "botnet dismantled") was conducted, which returned data from various sources, including: recent hearings on crime and terrorism (e.g., Whitehouse, 2014); lists of botnets that appear in large public websites (e.g., Wikipedia, 2014); websites of major IT firms (e.g., Microsoft), cybersecurity institutes (e.g., Symantec), and news agencies; and academic journals and conference proceedings.

Based on the data from these sources, a preliminary database of 19 botnet takedown initiatives was created. The database is being developed and maintained by the Technology Innovation Management (TIM) program at Carleton University in Ottawa, Canada, and it will be made publicly available once it is sufficiently mature. Table 1 summarizes the botnets and malware listed in the database, including each botnet's name (alias), its date of discovery, the date its takedown initiative began, its estimated size, and its purpose or tasks performed. However, the full database captures the following additional dimensions about the botnets and their associated takedown initiatives: unique features, means of dissemination, vulnerabilities exploited, responsible entity, impact, takedown leader, takedown process, involvement of authorities, legal issues, and timeline of key dates. As research progress and understanding of consequential dimensions grows, these dimensions will be refined.

Table 1. Summary of botnets and malware listed in the preliminary database of takedown initiatives

Informed by the evolving database on botnet takedown initiatives described in the previous section, this study proposes a botnet takedown model to enable diverse, proficient individuals working in IT organizations to understand botnet takedown initiatives. Because there are no existing models to explain the performance of botnet takedowns, Ferrier's (2001) model of the drivers and consequences of competitive aggressiveness on business was used as a starting point to construct an effective barrier against the economic growth of botnets. Ferrier’s process model of competitive interaction aims to describe characteristics of forces that influence competitive aggressiveness and the consequential organizational performance. Building on Ferrier’s (2001) study, the new two-part model is summarized in Figure 1. 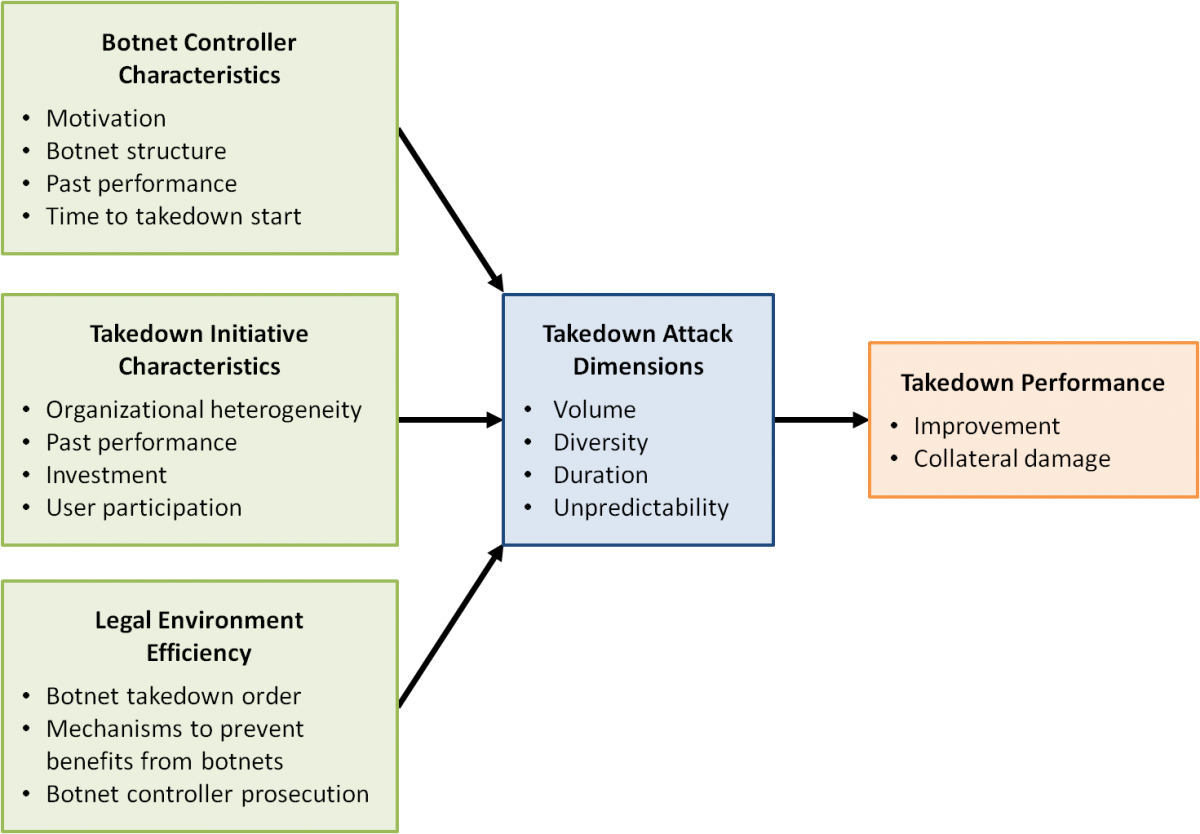 The model provides a framework in which to cast important questions and to enhance understanding of what constructs are of principal consequence for positively contributing to botnet takedowns while minimizing collateral damage. Thus, based on this model, several hypotheses can be derived:

Hypothesis 1. More aggressive legal action is positively correlated with an improvement in takedown performance. (This hypothesis is tentatively supported by the observation that, with the exception of four botnet takedowns [Pushdo, Kelihos, Lethic and Storm], the majority of the successful takedowns had a significant legal component.)

Hypothesis 3. Organizational heterogeneity of the takedown initiative is positively correlated with takedown attack unpredictability. (This hypothesis is analogous to H1a from Ferrier [2001].)

Hypothesis 4. Takedown attack volume is positively correlated with an improvement in takedown performance. (This hypothesis is analogous to H5 from Ferrier [2001].)

Hypothesis 5. Takedown attack duration is positively correlated with an improvement in takedown performance. (This hypothesis is analogous to H6 from Ferrier [2001].)

Hypothesis 6. A decentralized botnet structure is negatively correlated with takedown performance and unpredictability.

This work is relevant to researchers, policy makers, and industry professionals. In particular, personnel in technical, legal, and management functions of organizations interested can use the suggested model to improve the quality of their communications by using similar taxonomy and accelerate decision making for the purpose of launching and operating botnet takedown initiatives. Also, these findings will be relevant to entrepreneurs who wish to launch and grown cybersecurity ventures that provide solutions to botnet and malware problems.

The preliminary database and proposed model mark the beginning of a potentially fruitful avenue of research. The database needs to be augmented and refined; the model and its associated hypotheses need to be tested. As our knowledge improves, the intention is that the empirical data and the model constructs will evolve and cybersecurity experts will become more efficient in taking down botnets through various means.

Abu Rajab, M., Zarfoss, J., Monrose, F., & Terzis, A. 2007. My Botnet is Bigger than Yours (Maybe, Better than Yours): Why Size Estimates Remain Challenging. In Proceedings of the HotBots '07 First Workshop on Understanding Botnets: 5. Berkeley, CA: USENIX Association.

Dittrich, D. 2012. So You Want to Take Over a Botnet. In Proceedings of the 5th USENIX conference on Large-Scale Exploits and Emergent Threats (LEET 2012): 6. Berkeley, CA: USENIX Association.


Rate This Content:
1 votes have been cast, with an average score of 4 stars

Reza Shirazi is an Analyst Programmer at the Canada Revenue Agency, Information Technology Branch. Previously, he worked for various government departments and the private sector. He holds a BSc in Computer Software Engineering from the Islamic Azad University in Tehran, Iran, and an MEng in Technology Innovation Management from Carleton University in Ottawa, Canada.

A model for executing and resisting botnet-enabled cyber-attacks and botnet takedowns does not exist. The lack of this representation results in ineffective and inefficient organizational decision making and learning, hampers theory development, and obfuscates the discourse about the “best-case” scenarios for the future of the online world. In this article, a club theory model for botnet-...

Cyber-attacks threaten our ability to use the Internet safely, productively, and creatively worldwide and are at the core of many security concerns. The concept of cyber-attacks, however, remains underdeveloped in the academic literature. To advance theory, design and operate databases to support scholarly research, perform empirical observations, and compare different types of cyber-attacks,...