Welcome to the January 2016 issue of the Technology Innovation Management Review – the second of two issues on the theme of Living Labs and User Innovation. It is my pleasure welcome back our guest editors for December and January: Seppo Leminen (Laurea University of Applied Sciences and Aalto University, Finland), Dimitri Schuurman (iMinds and Ghent University, Belgium), Mika Westerlund (Carleton University, Canada), and Eelko Huizingh (University of Groningen, Netherlands).

And, in addition to the new book on living labs published as part of our Best of TIM Review book series, as highlighted in the December editorial, we have recently published two more titles, bringing the series to seven books in total. The three newest titles are:

The books are available in ebook format on the Amazon store. Please see the Best of TIM Review website for details and ordering information. Note that all of the net proceeds from the sales of our Best of TIM Review ebooks will be used to offset the operational costs of publishing future issues of the TIM Review.

We hope you enjoy this issue of the TIM Review and will share your comments online. We welcome your submissions of articles on technology entrepreneurship, innovation management, and other topics relevant to launching and growing technology companies and solving practical problems in emerging domains. Please contact us with potential article topics and submissions.

From the Guest Editors

It is our pleasure to be able to kick off a fresh year of the Technology Innovation Management Review with the second issue on the theme of Living Labs and User Innovation. This issue includes a second batch of articles that were carefully selected and reworked from the living lab track at the ISPIM 2015 Innovation Conference in Budapest, Hungary. Accordingly, we would already like to invite you to the ISPIM 2016 Innovation Conference to be held in Porto on June 19–22, 2016. The conference will feature another designated living lab track including an invited speaker session hosted by the European Network of Living Labs (ENoLL), the catalyst and forerunner of living labs. Since its inception in the 2006 Helsinki Manifesto, exactly 10 years ago, ENoLL has grown in "waves" up to this day. To this date, nine waves have been launched, resulting in 395 historically accepted living labs all over the world and a strong core of 170 living labs of active members present in 20 of the 28 EU Member States and on all continents.

This rapid growth in the number of living labs accompanied a rather high attrition rate over the years indicates the growing pains suffered by this largely practice-based concept. However, together with ENoLL's growth, the number of academic papers on living labs has also started to blossom (Figure 1), which fosters a better understanding of the different aspects related to living labs. 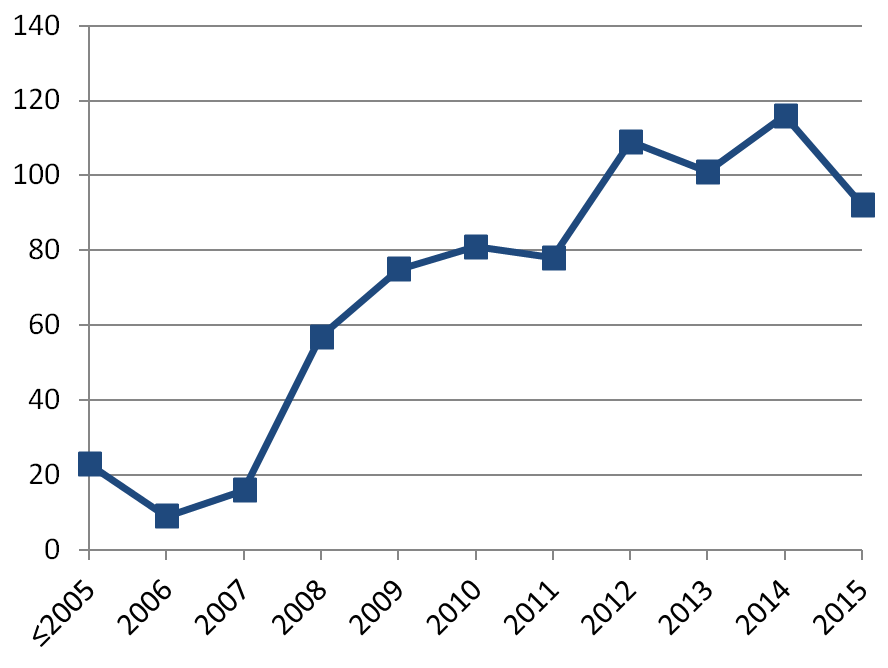 This transition from practice-based to more theoretically grounded concept that links up with broader innovation theories enables the optimization of living lab practices, but it also puts forward living labs as interesting study objects for a variety of innovation scholars. Recent work has focused on describing the roles of stakeholders and users, network structures, and innovation outcomes resulting in 17 propositions for living lab research (Leminen, 2015; Leminen et al., 2015; Nyström et al., 2014). Other work has shifted attention towards the multi-facetted nature of the living labs phenomena, distinguishing an organizational layer of collaborating stakeholders at the macro level, an intermediary innovation project layer at the meso level, and a methodological layer consisting of the different research and project steps at the micro level (Schuurman, 2015). The five articles in this issue further build on these arguments, including two studies (articles 1 and 4) on methodological aspects and the outcomes in living lab projects, and one article (5) looking at the intermediary process of individual actors in a living lab project and beyond. The two remaining studies (2 and 3) focus on the emerging concept of urban living labs – a specific type of living lab organization in a city context – to examine sustainable innovation supported by all city stakeholders.

The first article, by Dimitri Schuurman, Lieven De Marez, and Pieter Ballon, from iMinds-MICT-Ghent University and from iMinds-SMIT-VUB, investigates the impact of methodological characteristics of living lab projects on the outcomes of the innovation process. Based on a sample of 27 projects, they discovered that a multi-method approach and a real-life intervention increase the chances of obtaining valuable user contributions. The article adds to the theoretical and empirical foundations of the added value of living labs.

Next, Soile Juujärvi and Virpi Lund from Laurea University of Applied Sciences and from the University of Helsinki in Finland, examine urban living labs based on a case study of Espoo, Finland. Their study advocates combined bottom-up and top-down processes, which implies collaboration and co-creation between the different city stakeholders. They highlight the important role that citizens play in the early stages of the innovation process (i.e., the "preject"), while emphasizing that policy makers and city developers play an increasing role in later stages, to effectively realize the bottom-up ideas and projects. An urban living lab thus functions as an intermediary (actor) to facilitate and manage co-creation and collaboration between these different stakeholder groups and during the different stages of the innovation development process.

In the third article, Katarina Buhr, Maija Federley, and Anja Karlsson, from IVL Swedish Environment Research Institute and VTT Technical Research Centre of Finland, also elaborate on the topic of urban living labs. They base their article on two urban living labs in two different countries and focus on their contribution to sustainability based on societal goals that emerged primarily from the citizens and municipalities. They conclude that urban living labs need to be embedded within the local city context and require a long-term continuation to enhance user engagement. Therefore, the involvement of the municipality seems necessary, although it does not need to be the driving actor.

The fourth article is by Annabel Georges, Dimitri Schuurman, and Koen Vervoort from iMinds-MICT-Ghent University and from iMinds Living Labs. Based on an analysis of real-life tests within multiple living lab projects, they propose a model to analyze attrition during living lab field trials. Two types of attrition occur: non-usage attrition (which can provide valuable feedback) and drop-out attrition (which refers to the problem of users who stop providing feedback). The article concludes with a set of practical guidelines for practitioners.

Finally, Louna Hakkarainen and Sampsa Hyysalo from Aalto University, Finland, examine the roles of innovation intermediaries in living labs. By means of an in-depth longitudinal case study of a living lab project in the eHealth domain, the authors demonstrate that the intermediary process is versatile and cannot be reduced to facilitation. Their analysis shows that intermediation work in a living lab project consists of a range of tasks, including configuring, brokering, as well as facilitating. They contribute to the research on living labs by focusing on stakeholder and single-actor interactions, and also extend their findings to the broader domain of innovation intermediaries in open innovation.

Together, the articles in this second issue on the theme of Living Labs and User Innovation illustrate the theoretical progression made in the field of living lab research, as more and more authors succeed in demonstrating the added value created through living labs and in connecting living labs phenomena to broader innovation theories and discussions (articles 1, 4, and 5). Moreover, living labs also seem capable of providing answers to current challenges posed to society, as can be witnessed in urban living labs (articles 2 and 3). Through their focus on co-creation and multi-stakeholder engagement, living labs give society a voice in innovation, which facilitates sustainable innovation that is broadly supported. Therefore, we encourage further research into the different aspects of living labs from living lab researchers, but also from other innovation scholars. We foresee living labs further evolving into one of the game-changing innovation approaches for the coming decade.

Chris McPhee is Editor-in-Chief of the Technology Innovation Management Review. Chris holds an MASc degree in Technology Innovation Management from Carleton University in Ottawa, Canada, and BScH and MSc degrees in Biology from Queen's University in Kingston, Canada. He has over 15 years of management, design, and content-development experience in Canada and Scotland, primarily in the science, health, and education sectors. As an advisor and editor, he helps entrepreneurs, executives, and researchers develop and express their ideas.

Seppo Leminen holds positions as Principal Lecturer at the Laurea University of Applied Sciences and Adjunct Professor in the School of Business at Aalto University in Finland. He holds a doctoral degree in Marketing from the Hanken School of Economics and a doctoral degree in Industrial Engineering and Management in the School of Science at Aalto University. His research and consulting interests include living labs, open innovation, value co-creation and capture with users, relationships, services and business models in marketing, particularly in Internet of Things (IoT), as well as management models in high-tech and service-intensive industries. Results from his research have been reported in Industrial Marketing Management, the Journal of Technology and Engineering and Management, Management Decision, the International Journal of Technology Management, the International Journal of Technology Marketing, the International Journal of Product Development, and the Technology Innovation Management Review, among many others.

Dimitri Schuurman holds a PhD (2015) and Master's degree in Communication Sciences (2003) from Ghent University in Belgium. He joined the research group iMinds – MICT – Ghent University in 2005 and started working at iMinds Living Labs in 2009. Together with his iMinds colleagues, Dimitri developed a specific living lab offering targeted at startups and SMEs, in which he has managed over 50 innovation projects. As a senior researcher, Dimitri is currently responsible for the methodology and academic valorization of living lab projects. He also coordinates a dynamic team of living lab researchers from iMinds – MICT – Ghent University. His main interests and research topics are situated in the domains of open innovation, user innovation, and innovation management. In early 2015, he finished his PhD entitled Bridging the Gap between Open and User Innovation? Exploring the Value of Living Labs as a Means to Structure User Contribution and Manage Distributed Innovation.

Mika Westerlund, DSc (Econ), is an Associate Professor at Carleton University in Ottawa, Canada. He previously held positions as a Postdoctoral Scholar in the Haas School of Business at the University of California Berkeley and in the School of Economics at Aalto University in Helsinki, Finland. Mika earned his doctoral degree in Marketing from the Helsinki School of Economics in Finland. His current research interests include open and user innovation, the Internet of Things, business strategy, and management models in high-tech and service-intensive industries.

Eelko Huizingh is an Associate Professor of Innovation Management at the Faculty of Economics and Business, University of Groningen in the Netherlands. His academic research focuses on the intersection of innovation and entrepreneurship, marketing, and information technology. He has authored over 300 articles, has edited more than 20 special issues of journals, and has published several textbooks. His consulting activities include support of companies in their strategy and innovation efforts. He is also the Director of Scientific Affairs for the International Society for Professional Innovation Management (ISPIM) and the Director of Huizingh Academic Development, through which he has run more than 50 workshops around the world to help both junior and senior academics to publish for career advancement and to attract funding through improved written communication.

Urban Living Labs and Transformative Changes: A qualitative study of the triadic relationship between financing, stakeholder roles, and the outcomes of Urban Living Labs in terms of impact creation in the city of Groningen, the Netherlands

Urban Living Labs (ULLs) have become a popular instrument for finding solutions to urban challenges faced by cities. While ULLs have achieved a certain level of normalisation in cities, a general lack of understanding remains regarding the character and purpose of the ULL phenomenon still leaves many challenges open to be overcome. One challenge involves the potential impact of ULLs in...